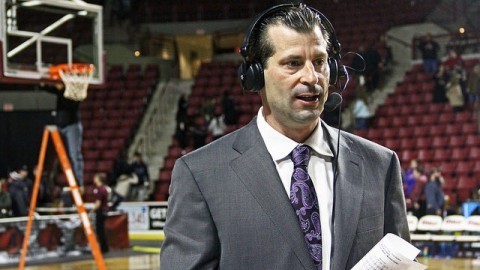 The Massachusetts men’s basketball team is traditionally a team which quickens the pace, forces the tempo and maximizes on its number of possessions.

It’s a style of play that, coupled with a hard-nosed defensive demeanor and a willingness to win “50/50” possessions, is coach Derek Kellogg’s definition of “UMass basketball.” Kellogg’s committed to it and recruited the requisite pieces to play it at a high level.

But recently, the Minutemen haven’t found themselves in many track meets. Instead, the pace of play is slowing down and the number of total possessions is shrinking.

Yet for UMass, which has won three of its last four games and travels to face Fordham Wednesday, it’s working out.

“As of late it seems as if teams have slowed the game down. There’s actually less possessions per game, which means we get less shots per game,” Kellogg said after practice Tuesday.

It’s a trend which typically occurs during conference play. Teams have more familiarity with each other, the season is nearing its conclusion and more energy is expended on crucial possessions in games which are usually close.

A season ago, slower play and increased scouting from the opposition contributed to UMass’ scuffling end to the season. At one time, the Minutemen were 16-1 and ranked No. 13 in the country, yet finished only 9-7 in conference play.

This year, the play is again slowing down. And so far, the Minutemen are adjusting.

They’ve won three of their last four games, the exception being a 62-56 loss to Saint Joseph’s on Jan. 21. The average number of total possessions within a game during that stretch is 61. Twice, UMass has played games that didn’t reach 60 total possessiona: the loss against the Hawks (58) and last Saturday’s win over Saint Louis (59).

But Kellogg believes that despite the lesser number of possessions, the pace of games is at an ideal level, as evident by the three wins in four games.

“I’ll throw in a hook shot from half court if we had to. As I’m coaching I feel like the pace of the game is pretty good, even the Saint Louis game. It feels like it’s moving but when you look at the number of possessions we had, it didn’t move maybe quite as fast but we are getting enough open court plays to make it feel like a faster pace than it actually is.”

UMass isn’t seeing a significant decrease in offensive production, either.

It’s offensive rating for the season – which is a stat that measures how many points a team would produce for the entire season – is 100.7, which is 217th out of 351 teams. In the Minutemen’s last three wins, that number dropped to 97.9, but was still higher than their opponents. The outlier was the St. Joe’s loss, where their offensive rating was 93.3 as opposed to the Hawks’ 103.3.

And the more methodical basketball appears to be suiting UMass’ best player, Cady Lalanne, quite well.

According to Lalanne, the offense is starting to focus on establishing a presence in the post during developed half court sets.

“It’s pretty good, my teammates know to try and go inside-out early and establish the post,” Lalanne said. “Then we can start working on the outside later in the game. I thought we did a good job with that (against SLU) which opened up a lot of stuff toward the end.”

Minutemen guard Derrick Gordon sat out portions of Tuesday’s practice as he deals with a nagging Achilles injury.

“I’m banged up right now,” Gordon said. “I’ve got some Achilles tendonitis going on in my left foot which has been bothering me for two days or so. I’m trying to stay off it as much as possible and just get treatment so I can try to at least be close to 100 percent for tomorrow.

Gordon said it’s something he dealt with last season too.

“(Kellogg) knows my situation and I didn’t really want to practice as much today because it was really, really bothering me,” he said.

“We’re going to need him to play and cover a guy like Paschall and we need him as close to 100 percent as possible,” Kellogg said.”

When UMass guard Jabarie Hinds takes the floor Wednesday night, he’ll be doing so in front of a number of family and friends.

Hinds is from Mount Vernon, New York, which is about 30 minutes away from Fordham. He said it will

be a good feeling to head home, and that he doesn’t often get a chance to return. It’s not the first time he’s gotten a chance to play close to his hometown, as he played in New York on multiple occasions as a member of West Virginia before he transferred to UMass.

“It’s always good to go back home,” he said. “I’ve been away from home for a long time and now I get to go play in front of my family and friends.”