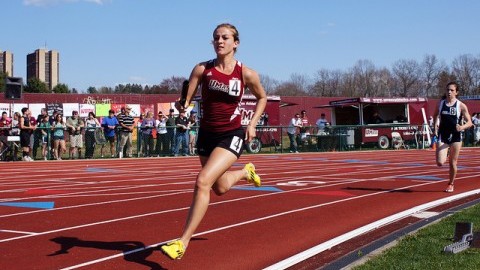 Throughout the season, much of the focus for the Massachusetts women’s track and field team has been on the track side of competition. But if the field side continues to perform like it did this weekend, that could very well even out.

The Minutewomen came in fourth place out of nine teams at the URI Coaches vs Domestic Violence Invitational at Mackal Field House in Kingston, Rhode Island – the same venue as the Atlantic 10 championships, which take place in two weeks.

The solid performance was highlighted by first-place finishes from seniors Ashley Palmer and Becky Stoyle. Palmer took gold in the long jump competition with an 18-foot, 7-inch jump which was six inches ahead of second-place finisher. Maria Curit of Stonehill College. The jump was also only .75 inches shorter than her personal best that she set during her sophomore year.

Courtney Kromko and Stoyle would finish fourth and fifth, respectively.

Palmer, Stoyle and Kromko all qualified for the New England championships with their jumps Saturday.

Rachel Hilliard and Heather MacLean also continued their recent success on the track during the meet.Hilliard finished seventh in the 1-mile run with a five minute, nine second mark. MacLean finished second in the 500-meter run by a close margin and qualified for New Englands championships in the process.

“We always know we can count on those two to have a great performance,” UMass coach Julie LaFreniere said. “They have become leaders on this team with their consistency and it really pushes everyone else to get better.”

In total UMass snatched 19 top-eight finishes during the meet. This is a total that LaFreniere said she is excited to see going into the A-10 championships.

Both the UMass men and the women’s track and field teams are now gearing up for the most important meet of the year up to this point: the A-10 championships.

Staying healthy will be essential for both teams.

“We have been hit hard by some tough conditions and injuries that haven’t allowed us to reach our full potential,” LaFreniere said. “Working hard is important over the next couple weeks, but we also need to stay healthy so we are able to compete at our highest level.”

In last year’s meet, the men and women both finished sixth. The eventual winners were George Mason for the women and Rhode Island for the men.

“I’ve stated before that one of my main goals in every season is to have a strong conference performance,” LaFreniere said. “This is where you really see where your team is as you prepare for the outdoor season. I am looking for everyone to work hard over the next two weeks to be ready for the meet.”