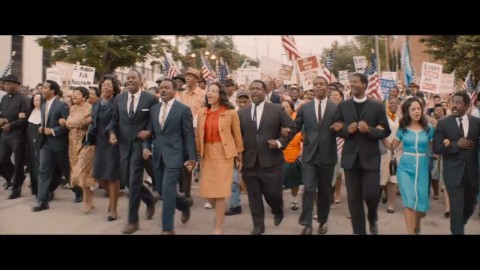 The road to the 87th Oscars was paved with protracted, widespread criticism of the all-white acting categories. No actor of color received Academy recognition. Most notably, David Oyelowo and Ava DuVernay, who starred in and directed “Selma,” respectively, were left out of the accolades.

Based on pure merit, Oyelowo deserved a spot on the short list. His performance outshined the current nominees, save for perhaps Michael Keaton (“Birdman”) and Eddie Redmayne (“The Theory of Everything”). Nonetheless, he received no nomination, inexplicably overlooked for the first leading role in the film of Dr. Martin Luther King, Jr.

Recently, at the 30th Santa Barbara International Film Festival, Oyelowo criticized the Academy for overlooking black actors. Even when the Academy recognizes them, he noted that the roles that it selects are roles of subservience.

“We as black people have been celebrated more for when we are subservient, when we are not being leaders, or kings or being in the center of our own narrative driving it forward,” Oyelowo said.

He went on to note several famous black actors who were snubbed for lauded and classic performances. Sidney Poitier, who was the first black man to win Best Actor, didn’t even receive a nomination for “In the Heat of the Night,” perhaps his most famous role, in which he played a detective. Instead, he won for “Lilies of the Field.” In that movie, he portrayed a nomadic menial laborer.

The “Selma” actor’s point holds up when examining Poitier’s case. “In the Heat of the Night” received seven Oscar nominations and won five; all of these accolades went to white producers, directors and actors. Poitier, whose role remains legendary decades later, didn’t even make the nominee pool.

Furthermore, Poitier’s snub came in 1967, four years after he had already broken the color barrier for Best Actor and won for “Lilies in the Field.” The 1967 role would’ve also been his third nomination, so Academy recognition wouldn’t have been truly novel. Nonetheless, Poitier was overlooked.

Oyelowo also mentioned Denzel Washington’s performance as Malcolm X, which lost to Al Pacino’s role in “Scent of a Woman.” Washington’s misses extend further than Oyelowo touched upon. He also lost for praised performances in “Cry Freedom” and “Flight,” empowered roles as an anti-apartheid activist and a decorated pilot with alcoholism, respectively.

Washington’s wins? They came in the form of “Glory,” in which he played a former slave struggling against Northern prejudice during the Civil War, and “Training Day” as a crooked cop. Although both of these roles are astounding acting, they fit the narrative Oyelowo criticized. One is a role of subservience, the other of ignobility and amorality.

Of course, some outliers exist. For instance, Morgan Freeman won for “Invictus” in 2009, Don Cheadle won for “Hotel Rwanda,” Jamie Foxx for “Ray” in 2004 and Whoopi Goldberg nabbed a trophy for “Ghost” back in 1990. All of these were roles of empowerment or, at the least, not of servitude. Despite these instances, the overwhelming dearth of black actors – both as nominees and as winners – can’t be ignored.

The situation fares little better for male actors. Since Poitier’s first nod in 1958, only 19 men have been recognized. That figure is undermined greatly if you consider that Freeman and Washington alone account for seven of those nominations. So even though males face better odds than females in the major acting categories, their margin of success is paper-thin.

Beyond black actors, this recognition drought extends to Hispanic-American actors. Throughout the entirety of the Academy’s history and across all four major acting categories, there have been only six nominees.

The problem, evidenced by the timeless performances I’ve mentioned above and the myriad ones I overlooked, lies not in a lack of options to select from, but in the source of voting at the Academy. According to The Telegraph, 94 percent of the 6,000 Academy members are white, while 77 percent are male. These lopsided statistics convey the skewed process in which films, actors and directors are nominated and awarded.

Oyelowo pointed out that films are too often made through a gaze of white guilt. The demographics of Academy members suggest that the appraisal of such films, too, suffers from this phenomenon. As a result, the Oscars oft ignore roles of color projecting power and leadership.

To snap this trend, the voting block must change. Actors of color have delivered innumerable works of art; the blame for the recognition drought must be placed at the doorstep of the Academy. Plenty of selections are out there, like Oyelowo’s part in “Selma,” but the change has to start at the source.