Youth at the forefront of UMass hockey’s recent surge 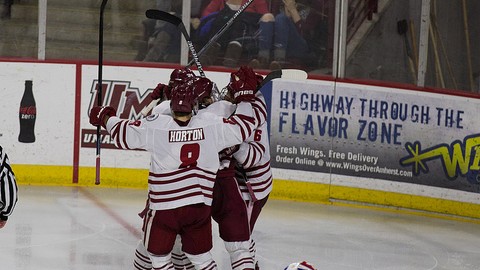 Entering the 2014-2015 season, it was clear the Massachusetts hockey teams success or failure would be determined by the performance of its 10-player freshman class.

Early in the year, the lack of experience showed for the Minutemen. The team started just 4-13 and had a knack for giving up leads in the third period. But since a 5-1 win against Air Force on Dec. 29, UMass has posted a respectable record of 5-5-1.

Part of the reason for the improvement is the emergence of the freshmen, which have accounted for 12 of the last 19 goals for the Minutemen.

Two of those goals came Saturday night in a 5-2 win over No. 12 UMass-Lowell, from forwards Dennis Kravchenko and Dominic Trento.

Kravchenko leads UMass in points. He’s skated as the Minutemen’s top center all year and has scored 10 goals to go along with 15 assists. The other top freshman has been defenseman Brandon Montour, a second-round draft pick of the Anaheim Ducks. Since arriving midseason, Montour has scored two goals and added 13 assists in just 13 games – including two assists tonight against the River Hawks.

“He’s got a special skill set,” UMass coach John Micheletto said after the game. “He’s going to be fun to work with and a real asset to our team.”

It’s not just Kravchenko and Montour that has stepped up its game as the season has progressed. Patrick Lee has played both center and wing, quietly scoring five goals to go with 14 assists. Riley McDougall has scored four times in the last six games.

But perhaps the most overlooked freshman has been Trento. After recovering from an arm injury, Trento has worked his way into the top-six forward group, giving the team valuable minutes on the power play and penalty kill. In his last four games he has three goals and five points, and filled in for senior captain Troy Power on the first line tonight after Power left Friday’s game against Northeastern with a head injury.

And in net, freshman Henry Dill has battled through an up-and-down season to record seven of the Minutemen’s nine wins on the season.

“The contributions of guys beyond Kravchenko and Montour who do get a lot of headlines – the Dominic Trento’s, the Riley McDougall’s – it’s nice when they do get the recognition, because everyone is contributing in that class,” UMass coach John Micheletto said after the win against Lowell.

As a whole, the freshman class ranks second in the country with 92 points, just two points behind first-place Boston University. It’s something Micheletto made sure to point out after Saturday night’s win.

“It’s pretty impressive,” Micheletto commented. “It speaks volumes of where they are now, and big picture, where they can be in the future.”

For most of the weekend, the Minutemen have been without two of their top-six forwards because of injuries. Power left Friday’s game after a crushing hit from Northeastern captain Adam Reid. The hit appeared to be to the head area, and officials discussed the play afterwards. Ultimately, though, no penalty was called.

“I’m disappointed that the game gets impacted so much (eight) minutes in when a guy takes an elbow to the head and not even a minor penalty was called,” Micheletto said after the loss against Northeastern.

After Saturday’s game, Micheletto said it was clear Power was not going to be able to play one day after suffering the hit.

“The evaluation this morning was obvious that there was no way he would be able to play tonight,” Micheletto said.

The other forward missing has been sophomore Steven Iacobellis. The team’s third-leading scorer (with five goals and 14 assists) was not medically cleared to play ahead of weekend action with an unknown ailment.

Freshman Anthony Petrella replaced Iacobellis as the extra forward in the lineup, and recorded an assist Saturday against Lowell. Maddison Smiley, a defenseman, was the lineup addition for Saturday after Power exited the game Friday night.

“For us to have to make up essentially 40-45 minutes of ice time with (Iacobellis and Power) not being in the lineup, the effort and commitment was special,” Micheletto said. “You hear about it in other sports… the ‘next man up’ mentality… I think our guys really embraced that.”

Micheletto said injury updates would hopefully be available later in the week.