Amherst resident runs charity for foster children out of her garage 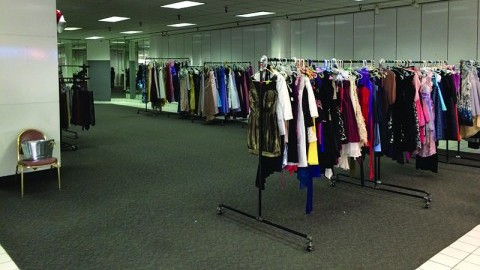 If you were to walk into Noryn Resnick’s garage, you might think that she was the queen of all hoarders. Boxes of toys line the walls and racks of clothing take up most of the floor space. What’s left is covered by furniture of all kinds and conditions. Dozens of soccer balls and other small items are shoved into whatever crevices remain.

However, this pack-rat’s heaven is actually the headquarters of Help Our Kids, a nonprofit organization Resnick runs out of her Amherst home that helps bring basic goods like beds, clothes and toys to foster children in western Massachusetts.

“One of the populations I always felt that did not have a voice or always got overlooked was kids in foster care,” Resnick, a former speech pathologist and audiologist, said.

Resnick founded Help Our Kids when she moved to Amherst as a way to help give foster children many of the amenities and experiences that their peers already have.

“Cases started coming up,” she said. Families needed “little things that really (mattered) and (made) a kid feel like a kid.

“Playing on a sports team, taking dance lessons, going to camp, having a dress for graduation – all these little things started coming up and there wasn’t money for it, so I didn’t like that. I said, ‘There has to be a solution to this.’”

Resnick began her solution by using her contacts at the Department of Children and Families, where she had previously been a volunteer, to start what she called a grassroots network of people who wanted to donate goods to the cause.

“It continued to grow,” Resnick said. “As I got more well-known and people were asking what I was doing, they would tell friends, and then the network was growing, and people would say to me, ‘What you’re doing is great, can I just give you a check?’”

With an increasing number of donations coming in, she decided to establish herself as a nonprofit so that Help Our Kids could accept financial contributions and asked a friend to help her set up a website for the organization. She also started building a reserve of donated items in her garage so that she could fulfill families’ and social workers’ requests more easily.

“When I get a request, within 24 to 48 hours, I fulfill the request,” she said. “Within 48 hours, I’m loading up the car and meeting somebody somewhere and delivering it.”

Her husband, David, who she refers to as her “schlepper,” built the racks in the garage to help accommodate the incoming quantities of clothing, often lending his car and his time to pick up donations and make deliveries to families.

Resnick began reaching out to businesses in the area, such as the Community Music School of Springfield, to create opportunities for kids who can’t afford them on their own. Another pursuit, mainly for kids about to graduate high school, was to take a group on a college tour.

“A lot of kids are capable of going to college … but don’t get the opportunity to have their feet on the college campus like everybody else does,” she said.

However, many of the kids’ needs are much more basic.

“The goal is just to help these kids feel more normal.”

Inspired by an annual event in Boston called Belle of the Ball – a program that provides dresses and shows for prom to girls from low-income families – Resnick started her own event called Fitting for the Future.

On Saturday, the first Fitting for the Future event was held at the Tower Square Meeting Room in Springfield. The contents of Resnick’s garage were taken into a large room and set out like display aisles in a store, allowing each of the 41 kids signed up for the event to walk around and pick out a couple outfits, complete with shoes, jewelry and accessory bags.

Overseeing the event were over 30 volunteers from all over the area, including the Hallmark Institute of Photography, Springfield Technical Community College, the Jolie Beauty Academy and many other local businesses to do the kids’ hair and makeup and take professional, quality pictures of them in their new clothes.

About five kids were being seen every half hour, many of them absorbing as many professional tips from the hair and makeup volunteers as they could.

One girl, who for confidentiality reasons can only be identified as Ria, said that although she’s “not a dress person, it’s good for you because it makes you feel beautiful.”

Resnick said that Fitting for the Future was a “great success,” and she hopes the event will be the first of many.

“If there’s something that can be done to make a difference, and I can do it, then I want to do it,” she said.

Help Our Kids can be reached at http://www.helpourkidsinc.org.

Isaac Burke can be reached at [email protected][liveblog]