‘Blarney’ guest policy is too harsh and was announced too late 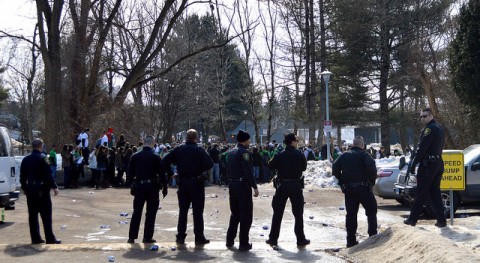 My boyfriend and I met in high school, and this weekend will mark our three-year anniversary. He goes to school in Florida, and bought plane and bus tickets at the beginning of January to come visit me. It was perfect timing because his spring break starts Friday.

Then, about two weeks ago, I received an e-mail from the University of Massachusetts forbidding guests this upcoming weekend who aren’t UMass students.

I expected a change in the guest policy similar to ones from previous events, where we could only have two non-UMass guests, but a policy this strict shocked me.

I talked to my residence director last Tuesday and explained my situation. I told her he would be arriving Friday afternoon, March 6, and asked if there was any way that an exception could be made given my situation and the short notice that was provided. She put in a request to make an exception to the modified guest policy.

However, three days later, I received an email that said that despite my argument, no exceptions to the guest policy were going to be made.

Even better, the University’s alternate solution for me was to have my boyfriend get a hotel room in the university hotel, which costs about $150 a night, making it seem as though the result of the decision was primarily to make more money.

Unless the University would like to reimburse my boyfriend for the expenses of the trip, such a response is unacceptable, considering how long it waited to announce the new guest policy.

The University should not punish someone who has clearly advocated for herself, and shown based on the sincerity and legitimacy of her request – not to mention a strong academic record – no desire to participate in the festivities this weekend. There must be a way that an exception could have been made based on the circumstances.

I have talked to a number of people about my dilemma and many of them have agreed that my feelings are warranted. When I told people about the argument I made, they were surprised that no exception was made.

Others have spoken of facing similar dilemmas, proving that this weekend is not all about “Blarney Blowout” – many students had prior plans. I highly doubt that the decision of such a large guest policy change two weeks before the “biggest party of the school year” was such a last minute decision. Students have a voice at this school, and the University shouldn’t impose new policies on us without adequate warning.

Let me make this clear, I’m all for following the rules and don’t often make requests to be an exception to the rules. However, my boyfriend spent close to $500 on tickets to get here, all of which is non-refundable at this point. He made the travel plans because this is the only time of the entire year that he can visit and I had said he would be able to stay here at UMass in my dorm. I am a freshman, so my only knowledge of “Blarney Blowout” is all hearsay, and it was almost impossible for me to know that this change in the guest policy was coming.

I understand the necessity for tighter restrictions, but what was wrong with a less strict modification to the guest policy, such as only being able to have two non-UMass guests? And why should everyone, including some like myself who hadn’t even been accepted to UMass at this time last year, suffer for the actions of a small group of people?

These restrictions will not prevent UMass students from indulging in “Blarney.” So why implement such a harsh policy that will affect those who have no desire to participate in Saturday’s revelry?