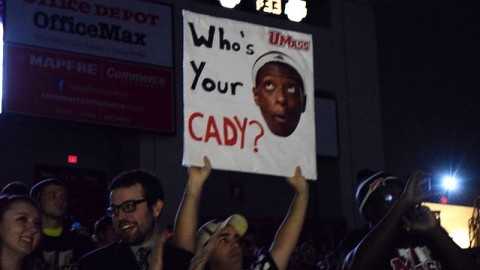 Following the Massachusetts men’s basketball team’s 87-65 loss on the road to George Washington Saturday, Cady Lalanne said he’d need to check in on the mental wherewithal of his teammates upon arriving back in Amherst.

He said he hoped his teammates still want to make something happen in the Atlantic 10 tournament, and questioned whether every player on the team cares enough to make a run. It wasn’t convincing.

Now, after a return to practice and a team-wide group text message, Lalanne feels he has his answers.

“As soon as we came back to practice yesterday guys went hard,” Lalanne said Tuesday. “We were competing, working on half-court defense. It brought a new energy that we haven’t had since the first week of practice. It brought confidence, I feel pretty confident.”

Fellow center Tyler Bergantino compared it to the rekindling of a fading flame. The quintessential energy player on UMass’ bench, Bergantino said he feels the team’s energy level was where it needed to be.

“You live or die depending on the energy you have,” he said. “I think we’re fresh. Of course we’ve had tough losses and nobody wants those, but at the same time I think that fueled the already burning fire inside of us.”

The first indication the Minutemen were still buying in to the season was shortly after they arrived back from Washington, D.C. and a group message with every member of the team began to circulate.

Bergantino said it started with one big message, which subsequently resulted in follow up messages. Soon, a number of players were involved. And while Bergantino and Lalanne were reluctant to trace the exact origins of the message, both acknowledged it was a step in the right direction.

“Everybody replied that their head was all into it and they’ll give their all when we get down to Brooklyn,” Lalanne said. “To me, that was a positive, it was encouraging.”

“Everybody’s on the same page as you. I’ve never been a part of the team where everybody had the exact same goal and it didn’t matter who did what on what day, everybody is happy for one and other. I think that’s the key to our success right now.”

According to Lalanne, those types of conversations traditionally take place in person. But he thinks the platform of the message allowed more players to voice their feelings.

“It’s something different because most often we meet in person and guys wouldn’t really speak out as much, because some people don’t really like confrontation,” he said.

“Some people feel better doing it through the group message. When the message came out, guys spoke about their feelings a little bit. It seemed like it cleared out the situation and everybody said they were ready to be 10 toes in.”

Lalanne said these types of interactions are an effort in adaptive leadership.

UMass faces La Salle – a team that has already beaten twice this year – Thursday at noon in the first round of the Atlantic 10 tournament. With the goal of winning the championship in mind, the Minutemen hope it’s the first of four straight games.

The most important characteristic when playing in a tournament situation? According to Lalanne, it’s energy. And energy comes easier when the team works as a collective unit.

“I mean, it’s challenging but the way we’ve been conditioning and working out, I think the amount of guys we play and substitute for each other, we have enough energy to win four games in four days,” Lalanne said.

“I think that’s the advantage we have over other teams – we have a 10-guy rotation. So it’s fresh bodies in and out.”