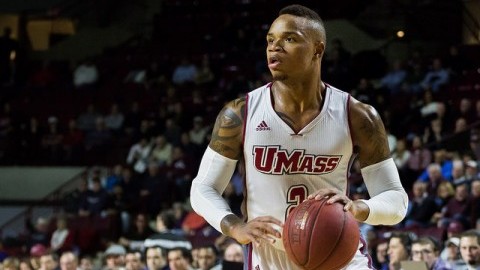 #2 Derrick Gordon searches for an opening in the defense. (Alec Zabrecky/Daily Collegian)

Massachusetts men’s basketball guard Derrick Gordon has one year of eligibility remaining and hopes to display his talents in a prominent, featured role next season.

On Tuesday, both Gordon and UMass decided that it won’t be with the Minutemen.

The redshirt junior is leaving the team with the goal of transferring to another program. He plans to graduate this year, and is eligible to join another program immediately.

“We had a great conversation and what really came out of it is that he’d like a little bit of a change of scenery,” UMass coach Derek Kellogg said when reached by phone Tuesday night. “He’d like to be more involved as a feature player on the basketball front and he thought a change of scenery would be good – and I agree. It was a mutual decision to let him graduate and find a place which might fit in a little bit better basketball-wise.”

A year ago, Gordon announced he was openly gay, becoming the first openly gay Division I men’s basketball player. Gordon said his decision to leave had nothing to do with his sexuality in an interview with ESPN.

“I appreciate everything that the coaches and my teammates have done for me,” Gordon said. “As far as me leaving, it has absolutely nothing to do with my sexuality. In fact, everyone could not have been more supportive with my situation.”

Instead, Gordon told the Daily Hampshire Gazette he simply wasn’t happy with his role.

“Throughout the whole year I wasn’t really happy,” he said. “I felt that I could be contributing a lot more and doing a lot more for the team and unfortunately it didn’t work out … It was just one of those situations where I wasn’t happy. It was better to go ahead and leave. It’s a good thing I have one year of eligibility where I can go anywhere I want to and play right away.”

“I thought Derrick was great for us,” Kellogg said. “I had no problems with his basketball game and where he was at. One of the things he said was he wanted the opportunities to, at some point, take care of his family. And he thought to do that, he had to be a guy where a lot of different plays are run for or the offense runs through you to a certain extent.

“And we play a little bit differently. At the end of the day it was something that we talked about and he’s going to find a new place.”

Kellogg said that despite Gordon’s loss, he’s looking forward to working with his roster next year.

When asked about the balancing of roles within the team, Kellogg said he was “fortunate” to have the guys he has in his system.

“You try to get the right kids who fit your system and how you coach and take on your personality,” Kellogg said. “It’s a world of instant gratification so it becomes a little difficult at times to get young people to buy into certain situations … I’ve been fortunate to have the right kids in the program.”

Kellogg said Gordon will remain on campus throughout the rest of the semester and will then take an additional course in the summer to meet graduation requirements.

Mark Chiarelli can be reached at [email protected] and followed on Twitter  @Mark_Chiarelli.