Earl Sweatshirt explores his dark side on great sophomore album 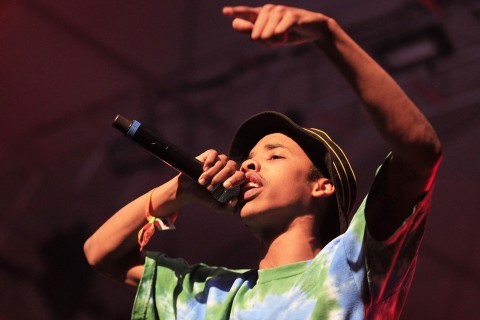 Earl Sweatshirt, a 21 year-old member of the famously dark and grotesque hip-hop collective Odd Future, released his second LP, the aptly titled “I Don’t Like Sh*t, I Don’t Go Outside” on March 23. The title itself sounds like the name of a seventh grader’s angst-ridden Tumblr account, which isn’t far off from the actual content of the album. The only difference is that no seventh grader has likely gone on the mind-bending binges of excess that Sweatshirt and the rest of Odd Future have explored in their work.

After being shipped off to a boarding school for troubled boys in American Samoa when he was 17 by his fearful mother, Sweatshirt returned a few years ago, but seemingly only to show just how reclusive he is. Joining Odd Future at the ripe age of 15, his mother disapproved of the foul language, dark content and implied drug use in his work and sent him away after the release of his first song, “Earl.”

After watching the video, one can’t really blame her. But Sweatshirt told NPR Music one of his goals for this album was to make music his mom could like. The jury is still out, considering the emotional spectrum Sweatshirt engages in ranges mostly from dark to disturbing.

“I Don’t Like Sh*it, I Don’t Go Outside” is a concise album of 10 songs clocking in at almost exactly 30 minutes. One can appreciate the quickness and effort put into each track, not allowing for over production or throw-away tracks. In true Odd Future fashion, the tracks progressively darken as time passes. “I Don’t Like Sh*t” opens up with “Huey,” a quick, organ-heavy track that introduces the listener to a more confident rapper, but also hints heavily that he wants you to leave him alone.

Later comes the would-be single, minus the scuffle with his label Columbia concerning the song’s rollout. “Grief” comes through with distorted, synth-heavy beats and poignant lyrics about the fake friends that come with fame. If anything, this album sounds like a large sign that reads “Leave Me Alone,” as Sweatshirt’s frustration with people, drugs, his label and fame is palpable on every track.

“AM//Radio” stands out for its more finished production, with unorganized jazz ensemble pieces coming in and out over a steady, synth-driven beat. Sweatshirt takes the listener back to his recent teenage years with bars about his family and home life.

Sweatshirt has said that “Faucet” was inspired by his strained relationship with his mother, but personally it’s a song that makes me want to lie in bed all day, be angry and call my parents. Muted trap drums flow well with the continuous sound of running water as Sweatshirt struggles with growing up and living the life rappers live at a much younger age. His words hit home, with the constant struggle of needing to be an adult but also needing guidance without judgment, something Sweatshirt clearly hasn’t gotten in a while.

Light piano is layered over a simple synthesizer and trap drum on “DNA,” a track where Sweatshirt’s verbal deftness shines. The album’s shorter tracks leave space for longer tracks like this one to highlight his greatest strength; making listeners uncomfortable. Troubled ideas spill from his mouth in a methodic flow, leaving the listener alone with their own thoughts.

Speaking of bars, throughout the album Sweatshirt shows development in his wordplay and a solidifying of his uniquely Odd Future-like flow. From tracks like “Wool,” which features fellow skilled lyricist Vince Staples, to “Mantra,” Sweatshirt contrasts his self-produced beats paired with his gloomy mind. The combination is truly mesmerizing. The heavy drug use referenced on most tracks could have had a hand in inspiring these lyrics, considering how contemplative some of the more dark lyrics are.

Sweatshirt’s been steadily maturing from his first mixtape, “EARL,” when he sounds like a disgruntled teen-child, to “Doris,” where his ideas and words feel too dark for his young age. But finally in “I Don’t Like Sh*t I Don’t Go Outside” he sounds like himself – a sad, exhausted young adult with a stomach full of drugs.

Elena Lopez can be reached at [email protected][liveblog]