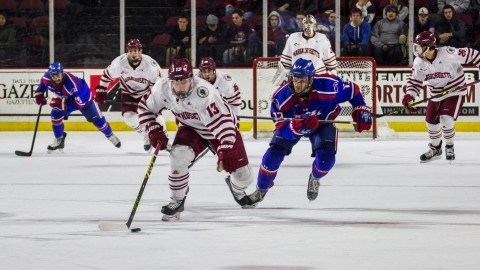 The agreement was originally announced on Twitter by Minutemen coach John Micheletto. Less than an hour after Micheletto’s post, Vatrano tweeted the news himself, writing, “Absolutely humbled and honored to sign with the @NHLBruins organization! What a dream come true!”

Vatrano led the Minutemen this past season with 18 goals and four multi-goal games in his redshirt sophomore campaign and first full season at UMass. After sitting out the 2013-14 season due to ineligibility issues after transferring from Boston College – where he never played a game – Vatrano made his collegiate debut in UMass’ first round loss in the 2014 Hockey East tournament against Vermont.

“I’m thrilled for Frank and his family and I’m proud of what he’s done here to put himself in a position to be where he is,” Micheletto said Thursday afternoon. “The work that’s gone in during his time here in Amherst has gone a long way to make him ready to embark on a pro career.”

Micheletto said that Vatrano’s potential of joining a professional organization became evident as the season wore on and discussions with NHL officials became increasingly pertinent.

“You get a sense over the course of the season about pro interest, especially when a player is a free agent,” Micheletto said. “You start to get a sense of what teams have interest beyond development camps.

“Obviously Frank knew what the pros and cons were of staying as well as going pro. To have the opportunity to be in the Bruins organization as a Massachusetts kid was an influence on the decision and I certainly understand why.”

Micheletto described Vatrano as a versatile player who was adept to playing in many different situations. While he was always a top option on the power play, Vatrano also saw minutes on the penalty kill at different points of the season.

But Vatrano’s biggest contribution came on the offensive end where he led an improved Minutemen attack. His 18 goals this year marked the highest single-season output since Casey Wellman finished with 23 in 2009-2010. Never hesitant in firing a shot, he led the Hockey East with 194 shots on goal.

“He has a desire to win and a desire to make the team better as well as himself as an individual. We saw that last year, how hard he approached practice to develop his game while he wasn’t allowed to play in games,” Micheletto said. “Particularly from a skill standpoint, his ability to shoot the puck and score goals had an impact strictly on our wins or losses and our team’s ability to have success.”

Micheletto acknowledged the impact Vatrano may have in further expanding UMass’ recruiting presence in western Massachusetts despite his shortened time with the program. A Longmeadow native, Vatrano grew up about an hour away from Amherst.

“His presence here is something that we want to do and make sure that kids from western Massachusetts see UMass as a great opportunity and a big time college hockey program,” Micheletto said. “Frank coming here certainly validated that.”

Looking forward, Micheletto said that Vatrano’s biggest obstacle would be getting accustomed to the style and pace of the professional level. According to Micheletto though, this adjustment period shouldn’t take long.

As for the Minutemen’s challenge in replacing Vatrano’s offensive presence on next year’s team, Micheletto said that it will be a group effort. UMass will bring back 17 players from last year’s roster in addition to an encouraging group of incoming freshmen recruits.