Gang of Four loses its essence on dreary ‘What Happens Next’ 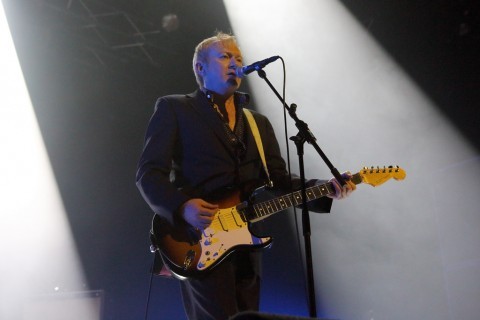 There is something strangely ironic in seeing post-punk’s most fervent Marxists indulge in one of the more egregious trends in the music business. Though this record is ostensibly by “Gang of Four,” in reality, “What Happens Next,” released Feb. 24, is more of a guest-studded solo album from lead guitarist Andy Gill than anything else.

To see a band that made one of the most ideologically raw and pure records of the punk era, its incomparable 1979 debut, “Entertainment!,” carry on with only one of the four equally crucial members that made it legendary is quite painful.

Though the band has made decent records without its extraordinary original rhythm section, they have all included vocalist Jon King. King’s politically charged outbursts, and their interactions with Gill’s fierce, razor-sharp guitar playing, were an immeasurable part of the band’s sound.

To be fair, “What Happens Next” does not really try to be a Gang of Four record either. Mostly, the album sounds like it was plucked right out of the dying days of alt-rock’s mid-90s twilight period. Aesthetically, it sounds like the band took all of its cues from a beat-up copy of Nine Inch Nails’ “The Downward Spiral,” a Berlin-period David Bowie vinyl and, maybe, a copy of “Entertainment!” itself.

Gill’s playing comes to the fore in scattered outbursts of feedback or tinny riffing, but other than that, “What Happens Next” is unrelentingly dominated by colorless, dreary and generic electro-rock sounds. The album’s rhythms and percussion are robotic and subservient to Gill’s varied inconsistent whims.

When there are bass lines, they are often buried deep in the mix, rendering them mostly irrelevant. Rhythm, so key to Gang of Four’s sound, is treated with indifference. And with no consistent, powerful rhythms to build off of, “What Happens Next” fails to get off the ground.

New vocalist John Sterry does actually do a somewhat admirable job with the scattered pile of instrumentation he is handed on opener, “When The Nightingale Sings.” His dystopian lyrics and dramatic, impassioned delivery do their best to inject some life into the song, which is an instrumental train wreck. The synth bass, glitchy live drums and indifferent riffing from Gill simply have no idea what to do with each other – it’s like arriving at a four-way stop on the road where each driver sits motionlessly, waiting for someone to take charge and do something.

Allison Mosshart of the Kills mostly turns “Broken Talk” and “England’s In My Bones” into Kills outtakes, with the band weakly morphing into Mosshart’s vehicle. Though “Obey The Ghost” has an excitingly atmospheric instrumental intro, it develops into a baffling, messy dirge, complete with some of the Facebook and social media-bashing lyrics that now seem obligatory for every veteran punk band. Rather than leading the listener in exciting new directions, the band seems content with simply telling the listener to get off their damn lawn.

Perhaps sensing his own absence, Gill cuts through the endless fog with some much-needed, vicious leads at the beginning of “Isle Of Dogs.” But even though it ends up being one of the album’s more forceful, convincing tracks, its endgame is incoherent and hard to discern.

Not even “First World Citizen” lives up to its original promise. This is especially underwhelming, because what’s better Gang of Four territory than class tension? But even this track, with its flat bass line and stoic percussion, fails to spark anything but disappointment.

The album’s one great moment is, not surprisingly, its most minimalist. “The Dying Rays,” a collaboration with German pop superstar Herbert Grönemeyer, showcases Gill’s compositional brilliance.
He mostly lets Grönemeyer do the heavy lifting, surrounding his vocals with a simple, but effective chord progression, and minimal electronics. Fittingly, the track that’s least reminiscent of Gang of Four’s body of work is the album’s finest moment by a mile.

Gang of Four was never content to remain stationary, so the disappointment that stems from a listen to “What Happens Next” is not because it has changed. It stems from the fact that they seem to be imitating the types of groups who became famous by imitating them. They changed the sound of punk rock forever, but seem to have forgotten that 35 years after the fact. Down to only one of their original members, they seem to be lost in a wake that they themselves created.

Jackson Maxwell can be reached at [email protected] and followed on Twitter @JMaxwell82.