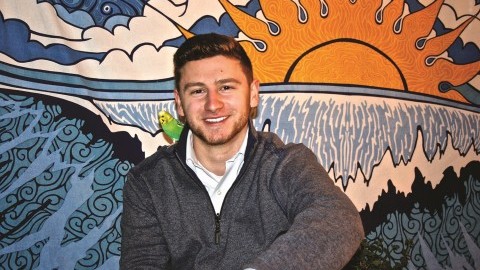 Behind every face there’s a story.

That’s what inspired University of Massachusetts junior Nick Vigneau to create Humans of UMass Amherst, a photo series featuring portraits and interviews with members of the campus community.

It all began, Vigneau said, when he discovered Humans of New York, a photoblog by photographer Brandon Stanton that features street portraits and interviews with people he meets in New York.

“I love the idea of Humans of New York and I think it shows so many unbelievably cool things about people in New York that you would never notice,” Vigneau said.

“I really just wanted to bring that here. We have so many cool people around here that I’m already finding.”

While there was already an existing Humans of UMass account when Vigneau started his project, he said he wanted to post more often and bring about the same essence and power as Stanton’s work – something he believes the preexisting series didn’t quite capture.

“It really is a kind of an art piece,” he said. “It takes empathy and it takes that artistic kind of viewpoint to see the stories in what people say.”

Vigneau usually approaches people he sees sitting alone in public places, such as Blue Wall. The first question he asks is always the same: “If you had to give one piece of advice to a large group of people, what would it be?”

He explained he learned this technique from reading about Stanton’s approach. All advice is biographical, he said, and stems from experiences people have had. Therefore, it’s a good way to get anecdotes, and drum up people’s emotions.

“I’m always looking for a story,” Vigneau said. “I meet so many people, it’s amazing.”

He recalled one interview he had with a student from Africa. When he asked about the happiest moment of her life, she recalled meeting her parents in an American airport after three years apart. When he asked her about the saddest moment of her life, she responded that it was that same moment, because she had to leave the rest of her family behind in Africa.

“That’s so powerful,” he said.

Vigneau added he gets his best responses by avoiding people who are sitting with others, as he said they will often shape their responses to what they think their friends will want to hear.

“Some people clam up, but surprisingly, most people are OK with (being interviewed),” he said.

“There’s something about the fact that you’re a random person and not a friend that they’ll just say everything very objectively to how they feel rather than shaping it to what they know about you,” he continued.

“I know how to give off the right energy and make people feel comfortable and connect with really anybody.”

Although several other students contribute, Vigneau runs the series mostly on his own.