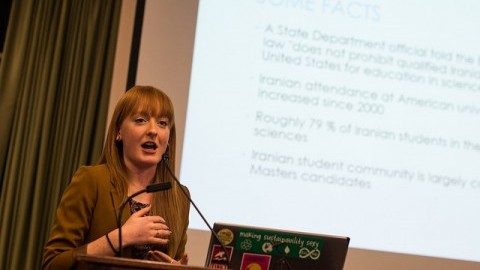 In high school, those involved in a club like Model United Nations may have been thought of as future politicians and diplomats of the world. But at the University of Massachusetts, the International Relations club is open to all students, regardless of what one may be studying.

Jessica Berger, a junior and the current president of the club, studies microbiology, but has always had an interest in debating. She participated in Model UN in high school, and joined the International Relations club upon arriving to UMass.

“I was really excited when I came to campus, I wanted to join right away,” said Berger.

Paige Smith-Hogan, a sophomore, is one of the head delegates of the club, and noted it isn’t necessary to have a specific major in order to join the club. Her area of study as a women, gender and sexuality and sociology double major has more of a focus on the United States, while the club itself expands to the international level.

Mohamed Mohamed, a sophomore studying electrical engineering, said he enjoyed debate throughout high school, and was a member of its Model UN.

“You don’t have to enjoy politics to enjoy the club,” said Mohamed, adding he is not interested in politics, but likes to debate.

Besides holding meetings on Wednesdays, the International Relations club also hosts a conference for high school students to come to the UMass campus and debate. This conference, known as UMass MUN, is approaching its 14th conference this weekend.

Berger said about 300 to 350 high school students come to the UMass campus from high schools around New England and the extended northeast area. She also said there are about 60 staffers who work at the conference.

This year’s theme is Latin America, which will have 16 committees related to a variety of topics, such as Haiti and the Dominican Republic peace talks.

Members of the International Relations club facilitate the conference, and acts as the chairs, vice chairs, crisis directors and crisis staff who come up with content for the high school students to debate. After the parliamentary procedures are run there is trivia, a movie and a dance for the attendees.

While Berger said the club receives some funding from the Student Government Association, UMass MUN is a major source of the club’s money.

This semester, the International Relations club has also hosted a meeting concerning the ban on Iranian students from certain academic programs, a decision that was later revised.

Berger said the idea came after running into a former teaching assistant, who is from Iran.

“I was talking to him, and he brought up the new policy, and because we had already talked beforehand, he knew I was the president of the International Relations club, so he suggested my club have a meeting,” she said.

With the help of the TA and the father of one of the residents in Berger’s dorm, a former professor at the University of Tehran in Iran, the graduate Iranian Student Club and the Persian Student Association were contacted. The meeting itself was bigger than expected, and more people began to show an interest in the club.

The club’s Campus Pulse page shows that it has over 200 members, but Berger and other members said that general body meetings have about 20 to 30 people in attendance.

Smith-Hogan said members are given the opportunity to attend different conferences at different colleges and university.

“We probably go to about six conferences per year and on each conference, we take anywhere between eight and 16 people,” she said.

Members seem to agree the club’s worth doesn’t simply stem from debating.

“It gives you motivation to learn about other countries and learn about what’s happening in the world because it’s not what an average person would know,” said Mohamed. He also said the public speaking skills strengthen as a result of participating, and sparks conversation with friends.

Ben O’Brien, a senior economics major who joined out of curiosity, said he was introduced to the club from a friend.

O’Brien mentioned that the club isn’t just about debate but also about the topics discussed and the people involved.

“The UMass environment is kind of like a bubble. Through IRC and other conferences, it opens up your world in so many ways,” he said.

Catherine Ferris can be reached at [email protected] and followed on Twitter at @Ca_Ferris2.