Kates: Exciting hockey will return to the Mullins Center 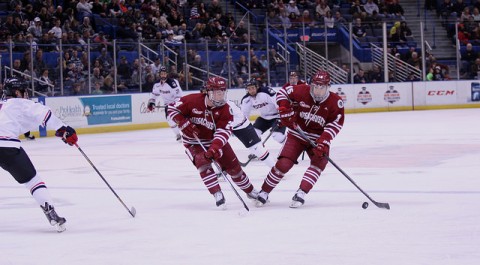 It may have been because I had just finished up a game recap of the Massachusetts hockey team’s five overtime win over Notre Dame in the Hockey East tournament, but I went to bed early Saturday morning with a thought in mind: These Minutemen have a real chance to pull off an upset and advance to the next round.

Instead, UMass finished the season how it started, getting blown out 7-0 by the Irish in the rubber match of the series.

But the mere thought the Minutemen could advance showed how much the team had improved over the course of the season.

While UMass fans may be bitterly disappointed with the team’s 2014-2015 campaign (which included one of the worst losses in program history, an 11-1 home loss to Vermont on Nov. 24), there is genuine reason to be excited for next season.

And no, I don’t think I’m losing my mind.

When you take a look at the roster assembled by coach John Micheletto, something sticks out immediately. Only six seniors are graduating this year, and just two players will be leaving the program next season.

Micheletto is trying to create a foundation, and that begins on offense.

Take a look at the individual statistics and the ages of the players who recorded the most points this season. It goes freshman, redshirt sophomore, sophomore, junior, freshman, freshman and sophomore.

The total point breakdown by class finished like this: 111 points from freshmen, 84 from sophomores, 32 courtesy of the juniors and 39 from seniors. This means that underclassmen accounted for roughly 73 percent of the team’s points, with freshman Dennis Kravchenko leading the way with 33.

In other seasons, Kravchenko might have drawn consideration for Hockey East Rookie of the Year, but this year the award has all but been handed to Boston University freshman and top NHL prospect Jack Eichel.

Another advantage to the youth is the staying power they possess. This isn’t college basketball – very few players are bolting to the NHL after their freshman or sophomore years to play professionally. So that means core pieces like Kravchenko, Frank Vatrano and Steven Iacobellis will take the Mullins Center ice for the next two or three years.

Oh, and don’t forget about Brandon Montour. The Anaheim Ducks prospect took Hockey East by storm when he arrived for the second half of the season, registering 20 points in 21 games. I can only imagine what the Ontario native will achieve next year in his first full year with the Minutemen.

Besides Montour, freshman Jake Horton and sophomore Marc Hetnik are returning to the blue line, as well as junior Ben Gallacher. As a group, the defensemen will be counted on the fill the minutes played by graduating seniors Oleg Yevenko and Mike Busillo and improve a defense that allowed an abysmal 4.2 goals per game.

Goaltending is the big question mark Micheletto will have to deal with heading into next year. Steve Mastalerz, who is another senior, split time with freshman Henry Dill, although Mastalerz was the preferred choice in net as the season progressed. Dill showed flashes of being a No. 1 goaltender, but struggled throughout the year.

But there are reinforcements on the way for the Minutemen, in goal and on defense.

Nic Renyard (a goaltender who plays in the Alberta Junior Hockey League for the Okotoks Oilers and will sign in the spring signing period) was recently honored as the league’s Most Valuable Player and Top Goalie. Renyard finished with a 30-7-3 record, earning a .925 save percentage. While Dill has the edge in experience, it wouldn’t surprise me one bit to see Renyard grab the starting job next season.

A prized recruit on defense is William Lagesson. A Swedish defenseman who was drafted by the Edmonton Oilers in the fourth round and will also sign in the spring, the six-foot-two Lagesson brings physicality and commitment in his own zone to the defensive corps. It’s easy for me to envision a defensive pairing with the Swede and Montour. Montour’s quickness matched with Lagesson’s defense would surely make for a dynamic duo, and Lagesson could replace some of Yevenko’s physicality on the top pairing.

At forward, UMass has received two National Letters of Intent from Kurt Keats and Austin Plevy. Plevy has dominated for the Brooks Bandits of the AJHL, recording an astonishing 92 points in 56 regular season games. His production will surely be welcomed, and will give Micheletto another offensive weapon to build on. In the past three years, Keats has also produced some impressive numbers, putting up 120 points combined in his last two seasons with the Powell River Kings in the BCHL.

With 16 underclassmen returning next year and a strong group of recruits entering the system, I’m going to go out on a limb and make a bold prediction: The Minutemen will finish next season in the top six of Hockey East, and high quality hockey will return to the Mullins Center.