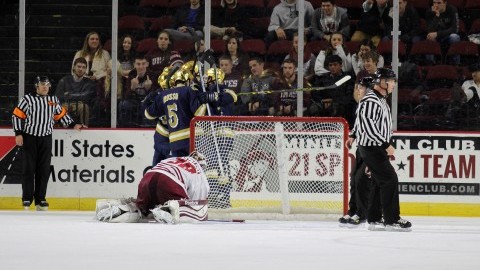 After the Massachusetts men’s hockey team won the longest game in NCAA history Friday night 4-3 off the stick of Shane Walsh, it seemed a sub-par season might be salvaged with a playoff upset in the first round.

But Notre Dame rallied to a 5-3 win Saturday, and closed out the series Sunday night in dominating fashion, knocking off UMass 7-0 to end the Minutemen’s season.

UMass (11-23-2) was doomed from the start of the pivotal game three. Thomas DiPauli beat Minutemen goaltender Steve Mastalerz with a long wrist shot just 48 seconds into the first period and the goal set the tone for a night of frustration and disappointment for UMass. It was one Mastalerz probably should have saved, as he got his glove on the puck but could not reel it in.

“The flukiness of the goal within the first minute of the game was a difficult obstacle,” UMass coach John Micheletto said. “It was going to be tight checking and low scoring the way they wanted to play on their home ice, and to have that go in that early certainly puts them at the advantage.”

The Minutemen struggled to find their legs and gain any footing offensively throughout the night, but especially early in the game. UMass got just three shots through to the net in the first period.

“(Notre Dame) took the air out of the ball, so to speak,” Micheletto said.

The Irish (17-17-5) were bigger, faster, more skilled and more disciplined. DiPauli (two goals), Peter Schneider (three assists) and Vince Hinostroza (two assists) led the way offensively, but team defense from Notre Dame was strong. The group limited the Minutemen to just 23 shots on the night, and few of them had any hope of beating goaltender Cal Peterson, who earned the shutout.

“Especially tonight with the grind of a three game series with the additional overtimes Friday night, it’s more and more difficult to try and play against their style when you’re in the hole,” Micheletto said.

The second period proved disastrous for UMass. After DiPauli made it 2-0 with another long wrist shot Mastalerz whiffed on, the wheels came off for the Minutemen. Mastalerz left the game midway through the second after a scary collision that looked like it resulted in a lower body injury.

Henry Dill replaced him in goal and struggled. The Irish scored on their first two shot attempts on the freshman, and the rout was on from there. Notre Dame led 6-0 after two periods, and the game was effectively over.

Sunday’s game also was the last game in the careers of four UMass seniors. Mastalerz, Steven Guzzo, Oleg Yevenko and Zach LaRue all skated for the last time for the Minutemen, while fellow seniors Troy Power and Mike Busillo did not play in the game.

“The biggest emotional low right now is that we weren’t able to extend the seniors’ Massachusetts careers,” Micheletto said. “I’m thankful for how hard they worked, and how hard they tried to lead us and push us to a better level.

While Notre Dame will move on to the Hockey East quarterfinals against No. 4 UMass Lowell, the Minutemen enter an offseason full of question marks.

Yevenko, who’s drawn interest from several NHL teams and attended summer development camps with the Boston Bruins, New Jersey Devils and New York Islanders, is now free to sign with a professional club at any time.

Most of the key contributors offensively are expected to return including defenseman Brandon Montour, and forwards Dennis Kravchenko, Steven Iacobellis and Frank Vatrano. But questions about goaltending, defense and depth will follow UMass into the offseason.

“The returning group gives us an outstanding opportunity to make noise in the league next year,” Micheletto said.

Kravchenko finished the season as the Minutemen’s leading scorer. The freshman center scored 10 goals and added 23 assists in his first year of college hockey, and figures to play an important role as a top six forward again next year. Vatrano also had a breakout year in his first full season with UMass. His 18 goals led the team, and he added 10 assists as well.

Montour joined the team midway through the season and brought a dynamic presence to the blue line. He scored three goals and notched 17 assists in 20 games, averaging exactly one point per contest.