Modest Mouse reclaims its sound, but not its essence 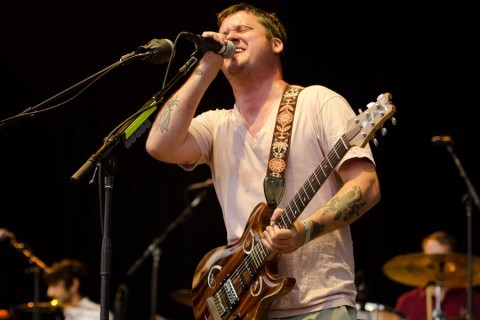 Seemingly absent from almost every conversation surrounding Modest Mouse’s first new LP in eight years, “Strangers to Ourselves,” has been the recent departure of Eric Judy, the band’s former bassist and one of its three founding members. His intricate, melodic bass lines formed a formidable foundation with drummer Jeremiah Green’s complicated, but always-precise rhythms.

Judy and Green perfectly set the stage for Isaac Brock, as deeply an idiosyncratic guitarist, singer and lyricist as any in rock. The band’s first three albums, 1996’s “This Is A Long Drive For Someone With Nothing To Think About,” 1997’s “The Lonesome Crowded West” and “The Moon & Antarctica,” from 2000, not only stood out as masterpieces during one of rock music’s worst creative droughts, they played a large role in setting the template for the blanket term of “indie rock.”

What’s important about those records is that they were the works of a cohesive group. Even after they became one of the first success stories of independent rock in the 2000s with their 2004 album, “Good News For People Who Love Bad News,” the original trio of Brock, Judy and Green remained Modest Mouse’s anchor, keeping a sense of exhilaration and adventurousness in their increasingly commercial and complex material.

But the seemingly permanent departure of Eric Judy and the near-decade long gap between albums has taken something deeply tangible from Modest Mouse. While the songs on “Strangers to Ourselves,” released March 17, could not be mistaken for the work of anyone else, they are the least confident batch of the band’s career. It is an album that at once manages to sound incredibly familiar and distantly impersonal.

The title track, which opens the album, is one of the release’s more daring and rewarding pieces. While it never quite builds to a payoff, its string-driven melancholy punches through the album’s high-cost production and creates an intimacy that the album as a whole sorely lacks.

Following this is “Lampshades on Fire,” a track that is such a Modest Mouse song that the band may as well stick a copyright symbol next to the song’s title. From the chord progression, to the stacatto “ba ba bas,” to the harmonic-driven guitar leads, it’s Modest Mouse delivering the most Modest Mouse-like song you could possibly imagine. But, in its comfortable but strong recreation of all the band’s sonic trademarks, it also manages to stay on-point, reminding the listener of what made them like Modest Mouse in the first place.

But from this strong one-two opening punch, “Strangers to Ourselves” endures a rapid decline. “Sh*t In Your Cut” tries to recreate the surrealist, infinite-highway type atmosphere of the band’s early work, but despite some strong guitar work from Brock, the song sinks under the album’s muscly production. This is followed by “Pistol (A. Cunanan, Miami, FL. 1996),” quite simply the worst song Modest Mouse has ever recorded.

A fuzzy, pitch-shifted calamity with lyrics trashy enough that Kings of Leon would cringe, it’s a disastrous misstep that decimates the album’s early momentum. After that joke of a song, even the pleasing guitar leads of a track like “Ansel” are overshadowed by its lyrics, some of which go “you can’t know/well you can’t really know/how was I supposed to know/how the hell would I know?” These sort of frustratingly obtuse couplets are vintage Brock territory, but after a song like “Pistol,” they almost feel like self-parody.

Unfortunately, this nagging sense of self-parody reappears throughout the record. After the opening line of “Coyotes” – “coyotes tiptoe in the snow after dark” – you just get the feeling that Brock is going to make the next line something with “park” in it. And he dutifully obliges with “at home with the ghosts of the national parks.”

This feeling even shows itself on the brief – but admittedly fun – interlude, “God Is An Indian & You’re An Asshole.” That, as ridiculous as it is, is about as Modest Mouse-y a song title as the band has ever come up with.

To be fair, though, Brock has some strong ideas throughout the record. One song that actually benefits from the album’s squeaky clean, high-budget production job is “Wicked Campaign.” With tastefully subtle synthesizers, propulsive guitar work and an explosive chorus, “Wicked Campaign” shows that Brock can actually fit comfortably into big-rock clothes. Brock’s razor-sharp guitar playing also helps cut through the grime of otherwise overstuffed songs like “Sugar Boat” and “Pups to Dust.”

At the end of the day, “Strangers to Ourselves” sounds more uncertain than anything else. Brock appears willing to make compromises in the name of greater accessibility, but also seems desperate to hold on to his own unique nature in the midst of it. This is not a new battle for the band, as these duplicitous desires were evident throughout both “Good News For People Who Love Bad News” and its even more successful follow up, “We Were Dead Before The Ship Even Sank.”

But this is not the Modest Mouse that successfully navigated creatively troubled waters to make those two great records, it’s Modest Mouse without its anchor, and one of the prime architects of its sound. And though Modest Mouse is often able to sound like themselves on “Strangers to Ourselves,” something profound has been lost.

Jackson Maxwell can be reached at [email protected][liveblog]