Noel Gallagher stays in his comfort zone on ‘Chasing Yesterday’ 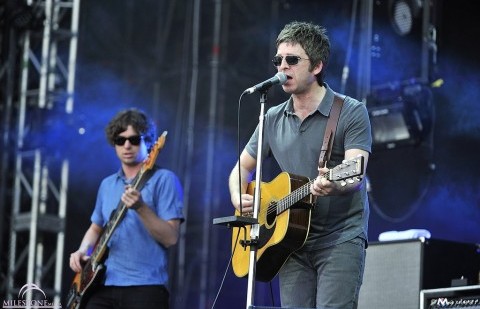 In his commentary for the music video portion of Oasis’ “Time Flies” greatest hits collection, Noel Gallagher can be heard openly laughing at the absurdly over-the-top video for “Stand By Me,” a single off of the band’s 1997 album, “Be Here Now.” One gets the sense that even he, the sole songwriter at the time, cannot believe how bombastic Oasis was during that period.

But, he can only mock it so much seeing as it was his own drug-fueled excess that fueled the 16-ton monolith that was “Be Here Now.” He can poke fun at the Russell Brand-esque rock-star trappings of Oasis at its peak, then turn around and release a solo album called, of all things, “Chasing Yesterday.”

If you had only two words to describe Oasis’ music, “chasing yesterday” would not be a poor choice. It was music that specialized in looking backwards. “Definitely Maybe,” its peerless 1994 debut, flawlessly channeled the simplicity of punk, the grandeur and hooks of the Beatles, the big riffs and fantasia of glam and the psychedelia and arrogance of the Stone Roses.

Behind it all was Gallagher, the man who essentially tossed off one of the most ubiquitous songs of the last 20 years in “Wonderwall,” and stood – sometimes quietly, sometimes not so quietly – behind his cocky frontman brother, Liam, who so brilliantly emphasized all the emotional ticks in Noel’s songs.

So the question is, has time changed Gallagher at all? The answer is, unsurprisingly, no. Though “Chasing Yesterday,” released March 3, has some moments of surprising sophistication, these 10 tracks have enough of the stadium-rock banger-DNA to appease even the most casual Oasis fans. That Gallagher can write a great rock song has never been in question. It is the question of whether he can apply the hooks and melodies that naturally tumble forth from his pen to more than meat-and-potatoes structures that remains unanswered.

On “Chasing Yesterday,” Gallagher does toy with some new ideas. But just when it seems he may stumble on something new and revelatory, he backs away and returns to his well-worn safe zone of big, anthemic rock. So “Chasing Yesterday” ends up being a mostly satisfying endeavor, but it’s a record that has the unrealized potential to be something far greater.

Predictably, “Chasing Yesterday’s” finest track is its least self-conscious one. “Lock All the Doors,” with its loud wall of guitars and fist-in-the-air chorus has the pure adrenaline of vintage Oasis, with little nuances that reward repeated listens and make it more than a simple headbanger.

“The Girl With The X-Ray Eyes” doesn’t have the most imaginative lyrics – “she shot me to the sun/like a bullet from a gun.” But, with its classic, Beatles-esque psychedelic atmosphere, it is a song that plays right into Gallagher’s strengths, giving him the confidence to pull it off with admirable ease.
“You Know We Can’t Go Back” has enough shimmery guitars, lyrics about “the moon and stars” and “one-horse town(s)” to be an early-2000s pop-punk radio hit. But, considering that Gallagher was one of the template-setters for radio rock in the 2000s, few people can make a pile of cheesy clichés like “You Know We Can’t Go Back” sound as fun and artistic as he can.

Opener “Riverman” is one of the album’s most diverse songs, incorporating Gallagher’s typical mid-tempo stadium rock ambiance with elements of sax-driven prog-rock. Though each side of the track is pleasant enough on its own, they don’t mix too well together, as it seems that Gallagher himself is unsure of what element he wants to dominate.

This uncertainty pops up again on the lengthy “The Right Stuff,” a song that runs along nicely, but never quite finds its purpose. But at least it has some sense of finesse, unlike the dreadful boogie-rawk of “The Mexican” and the tired, predictable “In the Heat of the Moment,” two tracks that set the album back considerably.

If anything can be gathered from this record, it is not that Noel Gallagher is necessarily “chasing yesterday.” He is a man who’s comfortable where he is, mining the musical territory that has granted him such phenomenal success over the last 20 years. But he is also a man looking to expand his horizons.

The unfortunate aspect of “Chasing Yesterday” is that, when he tries something new, he only does so hesitantly and half-heartedly. So, Gallagher is not really chasing yesterday. If anything, he’s chasing tomorrow.