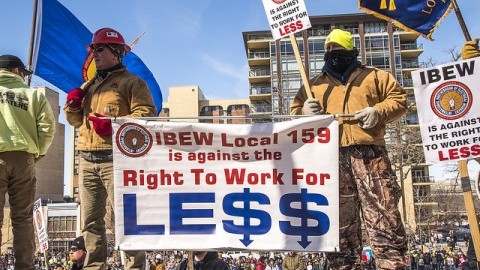 On March 9, Scott Walker, the governor of Wisconsin and Republican presidential hopeful, signed the freedom-to-work legislation, becoming the third state in the past three years to do so, joining Indiana and Michigan. The legislation makes Wisconsin the 26th state in the country to have a so-called “Right to Work” law. The law is the last in a pattern of anti-union action by Gov. Walker, beginning with a 2011 law limiting the collective bargaining rights of public employees.

What exactly does this law do? The legislation passed in Wisconsin is based on the idea that while every citizen has the right to unionize, they also have the right to not join unions or pay dues to unions. In certain trade professions, workers are required to pay union dues out of their checks every month in order to retain union membership. Even non-unionized workers are often forced to pay dues, based on the idea that they still are benefiting from the wage increases and perks bargained for by the unions.

What the “Right to Work” calls for is to prohibit unions from requiring membership or payment of dues by non-members Dues can cost around $20-$50 per month, depending on hourly wage. This money goes toward costs associated with collective bargaining such as lawyer fees, administrative and organizing costs.

By making dues and membership optional, the freedom-to-work legislation acts to reduce the power of unions and reduce their collective bargaining ability.

On the surface, the “Right to Work” movement makes logical sense. If American workers have a right to unionize, it follows that they should also have the right to not unionize. However, to truly understand why Scott Walker and other Tea Party and conservative Republicans want to limit the power of unions, one must look beyond the constitutional logic and think about the political reasoning.

The fundamental idea behind unions is that allowing workers to act as a cohesive body, ensuring the businesses act in the best interest of their laborers. According to the AFL-CIO, the nation’s largest union organization, union workers’ wages are 30 percent better than their nonunion counterparts. Unionized employees are also 60 percent more likely to have employer-provided pension plans. 79 percent of unionized employees have employer-provided health insurance, compared to 49 percent for nonunion employees.

Ever since the industrial revolution, unions have formed a cornerstone of the American labor sector. Organizations, such as the American Federation of Labor, proved to be major political forces during the early 1900s. Strengthened by President Franklin D. Roosevelt’s New Deal, Unions gained more prominence after World War II, with membership peaking at 35 percent of workers in the mid-1950s.

Their large member-base and organizational network make unions extremely important players in national elections. Either through lobbying, campaigning to members or organizational efforts, unions often represent major endorsements for candidates. Usually these unions favor the candidates that have their best interests in mind, which usually,but not always, are Democrats or pro-union politicians.

Since the 1950s when union membership peaked, it has been on a steady decline. Major blows to unions came under President Regan in the 1980s, and today the membership rate stands at around 11 percent nationwide. These unions, much smaller years past, do not carry the same political clout they once did. Republicans, with pro-business initiatives in mind, try as much as they can to diminish their ability to bargain with businesses, which then do not have to provide expensive benefits such as health insurance and pension plans.

Some see this latest action by Walker as politically calculated, and something he will capitalize on during his inevitable run for president in 2016. The purpose of this article is not say whether or not this is right or wrong but rather to contextualize why dismantling consolidated labor power might benefit conservatives, especially those running on a pro-business, anti-big government platform. The bottom line is that unions are inconvenient for businesses, conservatives work to make business more convenient. By shrinking the unions, companies can pay workers less wages, provide less benefits and therefore make more profit. Business wins, the worker loses.