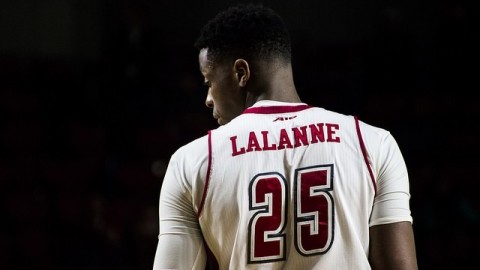 The Massachusetts men’s basketball coach turned to his bench, pointed, and five substitutes stood at once. On the court was a floundering UMass starting lineup, and Kellogg wouldn’t stand to watch it anymore.

The Minutemen trailed George Washington by 28 points with 18 minutes, 21 seconds remaining in an eventual 87-65 loss. It was their largest deficit of the game, and guard Derrick Gordon had just committed a turnover.

Kellogg wanted energy and fire and a unit on the floor which would play as just that, a unit. What Gordon, Trey Davis, Donte Clark, Maxie Esho and Cady Lalanne had shown up to that point was anything but those qualities.

So he took them all out at once.

“Yeah, the message was I’m looking for energy,” Kellogg said. “And a little pop per say, or a little wherewithal to make a push, try to make a run.”

The unit sat on the bench for four minutes, 41 seconds before Kellogg substituted them all back in. It was arguably the lowest point in a day littered with them.

“I was just looking for a little more energy,” Kellogg said. “There was just not a lot of flow or fluidity to what they were doing out there, so maybe a change would get some energy and give us a few baskets to chip away at it a tad.”

Was the message received?

“We were out there embarrassing ourselves, to be honest,” Gordon said. “He did it for a reason. We weren’t playing together, we were playing lackadaisically and like we just really didn’t want to play. I don’t blame him for doing what he did.”

“We were giving up shots,” Lalanne said. “We weren’t capitalizing on offense. We just weren’t doing it. He was trying to spark it up a little bit to go on a little run.”

The Minutemen (17-14, 10-8 Atlantic 10 Conference) have lost five of their last six games since ripping off six straight wins in February. At one point, the team had an outside chance at making a late push to the NCAA tournament bubble. Now, the prospects of making a run within even the conference tournament seem slim.

Following the loss to the Colonials, Kellogg said he was concerned with what he saw.

“Talk is cheap at this time of year, and there’s not a lot of time for us to practice,” Kellogg said. “It’s really gut-check time. Look in the mirror, I’m going to try to do everything I can to win a championship. I’m confident they’re going to come around and do that.”

“I’m hoping that guys are still trying to make something happen,” he said. “We’ll get back to campus and check on guys’ heads tonight.”

“Yeah, definitely. It’s up to the point right now in the season where it’s too late to be arguing or yelling and all that. It’s either going to be put up or shut up. We’re at the point where it’s win or go home. Our season could keep going for the next couple weeks or our season could be over Thursday. It all depends on how badly we want it.”

“Right now it’s like do you even care,” Lalanne said. “It’s win or go home. If you really care about this you’ll try not to lose. Win and play as long as you can. Are you really 10 toes in.”

Kellogg acknowledged it’s a poor time for his team to not play well. The Minutemen struggled offensively and compounded the problem by allowing George Washington to hit 14 3-pointers.

But by the second half, what was most evident was the despair and frustration on the UMass faces. Lalanne said that there’s a question looming in the locker room of whether players truly want it, based off the attitude of the team.

It didn’t look like a team that had the answers, and it’s running out of time to find them, as the Minutemen are the No. 8 seed in the Atlantic 10 tournament and face La Salle Thursday at noon.

“We’ve got to play back-to-back-to-back. I think we can win the whole thing, but everybody has to have that same mindset. I still think we can do it. A couple players were there, but this is definitely a heat check. We’ll see who wants to continue playing and who wants their season to end.”