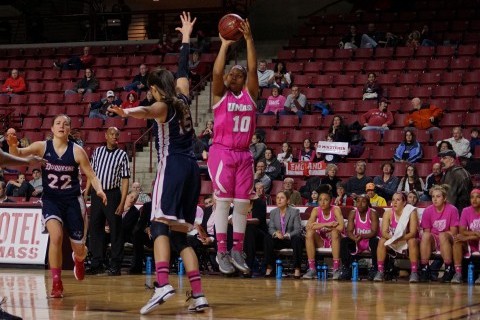 Sunday afternoon served as a fitting farewell to the three Massachusetts basketball seniors at Mullins Center, as the Minutewomen defeated Rhode Island 78-70 on Senior Day.

Coming out of the first half with a 38-29 lead, URI heated up after the break behind guard Charise Wilson, who finished with a game-high 23 points.

Wilson scored 21 of her points in the second half, including two 3-pointers to pull the Rams back to within striking distance early in the second frame.

But UMass guard Cierra Dillard wouldn’t let Wilson spoil the night for the seniors, finishing with 20 points, including seven key points to counter Wilson in the opening minutes of the second half.

“That was bound to happen,” UMass coach Sharon Dawley said about the Rams’ second half surge. “You can’t keep (Wilson) down, but that’s what confidence is about. … I think that was the time that I remember (Dillard) scoring.

“You could see everyone getting a little anxious and then (Dillard) put in a bucket for us and they relaxed a little bit.”

The Minutewomen showed resiliency after a slow start as URI shot out to an early 11-3 lead. A pair of jump shots from Kim Pierre-Louis sparked a turnaround midway through the first half and UMass surged back to take its first lead of the game nine minutes, 39 seconds into the half.

The two teams traded punches until Emily Mital hit a 3-pointer to beat the shot clock with just under four minutes to play in the half. Cierra Dillard followed with a field goal and a foul shot and, after another defensive stop, Mital capped off the run with another 3-pointer.

Mital, a senior who has played the most career games on UMass’ roster, finished with 11 points in her final game at the Mullins Center.

“It just felt right,” Mital said. “I never picture us losing this game. Going into it, we knew we were going to win it. It felt like it went how it should have gone and we got the (win).”

The Minutewomen navigated the Rams’ zone Sunday and broke their press defense throughout the afternoon, dictating the pace of the game.

The poise and confidence of Dillard, a true freshman, has been a staple for UMass this season. She guided the Minutewomen down the stretch on Sunday, driving through a URI press which forced 13 UMass turnovers.

After the game, Dillard credited the three seniors, Pierre-Louis, Mital and Paula Tarnachowicz, with helping her development this season.

“We have a great group of seniors as our leaders,” Dillard said. “They’ll teach you, they’ll show you, they just want to put you in the right step forward for the rest of your career. … I’m just happy that we got the win for them today. That’s what I wanted.”

Another milestone for Pierre-Louis

After scoring her 1,000th career point against Davidson two weeks ago, Pierre-Louis reached another landmark Sunday, becoming the fifth player in school history to reach 500 points in a single season.

After dropping 22 points Sunday, Pierre-Louis expressed her gratitude to her team and coaches who made it a priority to send their seniors off the right way.

“It definitely went how it should have went,” Pierre-Louis said. “It was just overwhelming to get so much care from my teammates who said, ‘Oh we’re gonna get this for you guys.’ So it just really warmed my heart to see that.”

While the Minutewomen enter the Atlantic 10 tournament as the No. 13 seed, they have been playing some of their best basketball of the season and are confident about their chances to make a run.

“I feel like we’re tournament ready,” Dawley said. “It’s exciting to go to Richmond playing this way. We don’t care who we get, we don’t care what time we play.”

UMass will face St. Bonaventure in the first round of the conference tournament in Richmond, Virginia on Wednesday at 4:30 p.m.