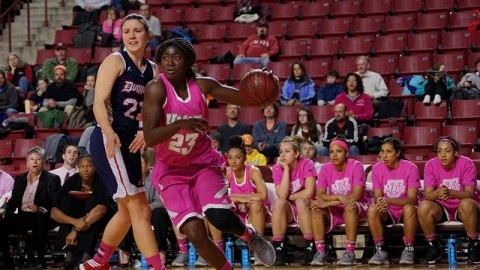 With tournament season upon us and March Madness on the horizon, every college basketball player in the nation is dreaming about their team’s chance to make history, their opportunity to pull off that dramatic upset and emerge from “The Big Dance” victorious.

For the Massachusetts women’s basketball team, their Cinderella story is over almost as soon as it began.

The Minutewomen lost to Richmond 67-63 Thursday in the second round of the Atlantic 10 tournament, one day after defeating St. Bonaventure 55-49.

“Obviously we’re devastated that we’re out,” UMass coach Sharon Dawley said following the loss. “I think the way we’ve been playing, I thought we had a chance of going real deep in this thing …We really wanted this game.”

After battling back and forth all day – the game featured 10 lead changes – UMass trailed by eight points with just 62 seconds left in the contest. But, as they have all season, the Minutewomen proved that they still had plenty of fight left in them.

Senior Emily Mital, who had eleven points in her final collegiate performance, hit a 3-pointer with 53 seconds left to cut the lead to five. After a pair of free throws from Richmond guard Lauren Tolson, who proved instrumental in icing the game for the Spiders down the stretch, UMass’ Kim Pierre-Louis drove to the lane for a layup cutting the deficit back to five.

With the Spiders already in the double-bonus, UMass was forced to foul the rest of the way, sending Tolson to the line five times in the last 50 seconds of play.

“I think if (Tolson) had missed one of those free throws, we may have been able to tie it up, but credit her,” Dawley said.

A jumper from UMass guard Amber Dillon, an acrobatic catch-and-shoot from beyond the arc by Mital, and a layup from forward Rashida Timbilla with 11 seconds left closed the lead to two, but Tolson – who came into the game shooting 86 percent from the line – was just good enough from the charity stripe (8-for-10, 22 points) to keep the charging Minutewomen at bay.

Pierre-Louis led the Minutewomen in scoring for the ninth game in a row with 18 points on 8-of-17 shooting, while tacking on six rebounds.

The departing senior was one of four Minutewomen to score in double figures on the night, as Timbilla (10), Dillard(16) and Mital also hit the mark. Freshman forward Ciara Rosten also had a solid performance, pulling down a game-high nine rebounds in 21 minutes.

“This team, in the last month, we’ve always had someone else step up,” Dawley said. “Today, as you’re saying goodbye to seniors that are playing a lot, you’re also saying “Wow, who are these freshmen,” and I think Cierra Dillard and Ciara Rosten really set the tone.”

While the loss of senior leaders Emily Mital and Pierre-Louis – who recently earned Second Team All-A-10 honors – will be difficult to overcome, the success and growth of the young talent on this squad, and the return of veteran Rashida Timbilla, bode well for the Minutewomen going forward.

“This team epitomizes, when things aren’t going your way, dig in, stick together, and work harder,” Dawley said.