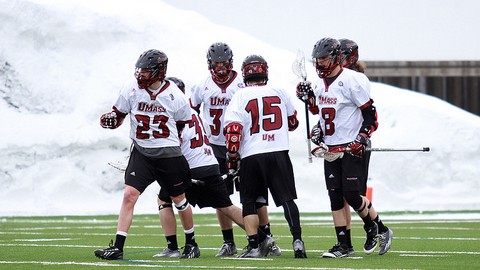 The Massachusetts men’s lacrosse team hosted Albany last year in what was its biggest loss of the season, 25-10, handing the Minutemen their first defeat following a 4-0 start.

A year later, UMass (0-4) now travels to No. 12 Albany (1-1) Saturday in a polar opposite situation, looking for its first win of the season.

Despite the rough start to 2015, Minutemen senior co-captain Ryan Izzo believes Saturday’s matchup provides an opportunity to jumpstart UMass for the rest of the season. He added that memories of last year’s loss still resonate with the team.

“Any time somebody puts that many goals up on you, it’s kind of still in the back of your head,” Izzo said. “Personally, that was one of the worst losses I’ve ever been a part of.

“But in terms of incentive this year, I think it’s high up there for us.”

The Great Dames were led last year by brothers Miles, Ty and Lyle Thompson who combined for 15 goals and eight assists against the Minutemen in their last matchup. While Miles and Ty graduated, Lyle returns as a senior.

Through two games, Thompson has three goals and three assists.

“He’s got great body control, tremendous skill level, a great feel for the game and is very unselfish,” UMass coach Greg Cannella said about Thompson. “He’d probably rather assist the ball than score the ball. He’s as tough as nails and very athletic.”

Izzo praised Thompson’s passing ability and emphasized the importance of playing off-ball defense in limiting Thompson’s teammates from getting open looks near the net.

He added that these results on defense have not been consistent this season in terms of communication and execution.

“Offensively I think they’ve been improving week-to-week but defensively, we’ve got to back them up and make some stops,” Izzo said.

“The intensity is there but I think you’ve just got to have that mental effort in terms of talking even when you’re tired at the end of a game, at the end of a quarter.”

Cannella said that these defensive inconsistencies place a further importance on offensive production. While he said he’s been encouraged by the steadily increasing offensive depth – six Minutemen scored multiple points last Saturday – Cannella added that these improvements must continue against Albany.

“Now the challenge is, if we’re averaging 10 goals a game, then we have to bump that up,” Cannella said. “We’re struggling to keep teams down so we may have to outscore somebody.”

According to Cannella, one key to spurring the offense is on the faceoff and ground ball opportunities. UMass hasn’t held the advantage in either category so far this season, leading to limited opportunities on the attack.

Sophomore attacker Nick Mariano added that winning these possession battles early in the game is crucial after coming off a slow start to Brown last Saturday in an 18-12 loss. The Bears quickly jumped out to a 5-0 lead in the first quarter of a game that was back-and-forth for the remaining three frames.

“We’ve got to play fast,” Mariano said. “We started really slow against Brown and that hurt us in the end. We learned from that.”

One positive note from the loss to the Bears was the return of Grant Whiteway. Coming off a lower body injury, the senior recorded a hat trick in his season debut.

According to Cannella, Whiteway had no setbacks against Brown and will be back in the four-man rotation at attacker against Albany.

“It just adds another offensive weapon,” Mariano said. “(Whiteway) brings a lot for us and it’s just nice playing with him again. He’s another leadership guy out there.”