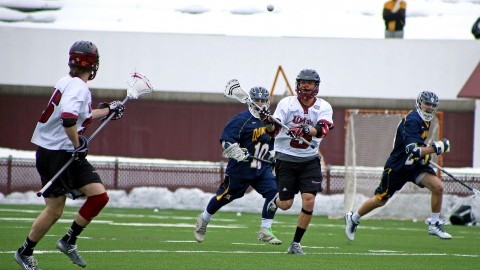 It didn’t take long for the Massachusetts men’s lacrosse team to find itself in an early hole Saturday against Penn State.

Just three seconds into the matchup, the Nittany Lions’ Drake Kreinz ran downfield to score the opening goal, marking the sixth time in seven games that the Minutemen trailed first.

But powered by an 8-3 run over the final two quarters, UMass fought back to defeat Penn State 12-8, earning its second straight victory.

“They came out swinging in the first quarter in those first five minutes so we had to fight back,” sophomore attacker Nick Mariano said. “I think we had a great effort in making the hustle plays and trying to outscrap them.”

The Nittany Lions (3-4) established a 4-0 lead in the opening eight minutes of play. Maintaining control of possession, Penn State limited the Minutemen’s offensive opportunities and didn’t allow a shot on goal until the 11:35 mark of the first quarter.

But UMass’ first shot, courtesy of Andrew Sokol, resulted in its first goal and initiated a 4-0 run by the Minutemen (2-5) to tie the game five minutes into the second frame.

“We had a few unforced turnovers early in the game but once we settled down and stuck to our game plan, we were able to generate opportunities and that’s ultimately what allowed us to score that many goals,” Sokol said.

“It was a team victory, plain and simple. We went down early, we fought together, we stuck together and our defense made a lot of big stops. Then once our offense got rolling, we were able to finish our opportunities.”

After back-and-forth action brought the score to a 7-7 deadlock with three minutes remaining in the third quarter, UMass clinched the victory with a 5-0 run, started by goals from Mariano and Peter Lindley in the last minute before the final intermission.

Mariano then completed his third hat trick of the year in the final quarter while Dan Muller and Gianni Bianchin added to the Minutemen’s late attack with their only goals of the game. Eight UMass players contributed goals on Saturday.

“We just tried to move the ball on offense and find the open guys,” Mariano said. “We were starting to can our shots in the third and fourth quarters which was huge.”

According to Sokol, UMass’ decisive run was spurred by its defensive performance. The Minutemen outshot Penn State 19-11 in the final half behind an aggressive defense that consistently forced turnovers.

“It’s a game of runs and we were able to go on a little one there,” Sokol said. “The defense played great too down that stretch and that was huge for us. It gave us confidence knowing that the defense was making stops which allowed us to be more aggressive.”

UMass coach Greg Cannella added that the Minutemen’s late-game success was a positive sign and contrasted to UMass’ failure to hold a late lead against Harvard on Feb. 21.

With the Minutemen winning 13-10 with less than six minutes remaining in their game in Cambridge, the Crimson battled back with four unanswered goals including the game-winner with 2:15 left.

“You’re in a situation that you’ve been in before against Harvard when you didn’t finish it, and this game you finish it,” Cannella said. “So hopefully the team can keep going that way.

“Any time you have a lead and the game starts to wind down, you want to stay aggressive. We were able to do so and execute. We were able to buckle down on defense during that time to scratch out some extra possessions.”

Saturday’s victory gave UMass its first winning streak of the season after it suffered five straight losses to open 2015. With next weekend’s game against Hofstra marking the beginning of the Minutemen’s conference schedule, Sokol noted the importance of UMass’ recent play in establishing momentum.

The Minutemen travel to Hempstead, New York next Saturday for a noon matchup against the Flying Dutchmen.