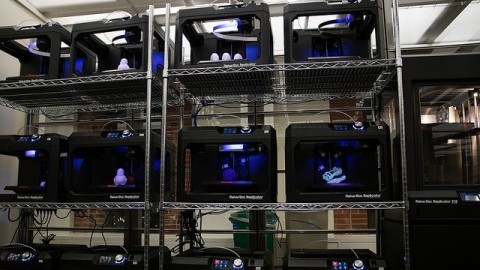 At this time last year, University of Massachusetts Director of Libraries Jay Schafer would not have seen a 3D printing lab in the W.E.B. Du Bois Library’s future

Today, with the snip of a pair of oversized scissors, the University has opened the United States’ fifth MakerBot Innovation Center – a 3D printing lab – and the first ever at a university library.

Even though he may not have seen it through his crystal ball, Schafer said that the center – a $275,000 project funded by the Friends of the Library – fits right into the library’s mission as a center for student success.

“3D printing is very much becoming a new thing in higher education,” he said. “Information is not just about books anymore.”

“The library is the hub of everything,” said Katherine Newman, provost and senior vice chancellor for Academic Affairs. “(The creation of this center) represents the characteristic of the UMass campus … progressive.”

The lab, which is the first of its size in New England, features 50 3D printers of various sizes (along with a large supply of the filament printing material), several 3D scanners, which can be used to digitize and recreate existing objects and a software platform that provides the lab’s printers remote access, print queuing and mass production capabilities.

During the Innovation Center’s infancy, MakerBot representatives will also remain on site to train UMass staff.

Schafer said that the grand opening of the center is going to be a “soft opening,” where the library can gain an understanding of the technology and how it can be used on campus before doing anything more substantial.

Already, however, students and faculty are envisioning how this new technology can be incorporated into the learning experience.

Maija Benitz, a graduate student and a teaching assistant for Introduction to Mechanical and Industrial Engineering, said that the course is rewriting its curriculum over the summer and hopes to incorporate 3D printing.

“One of the ideas is to build some small-scale engines,” Benitz said. “We would have the students working in groups of five to 10 and they’d design some sort of an engine. We were thinking that (the Innovation Center) would be a good resource to manufacture those engines.”

“This is a good way to be like ‘Hey, you’ve learned all this CAD software, now you get to actually use it to build something physical and to create a little bit more excitement about learning this software and getting them excited about the potential of this class and also the future,” she added.

The 3D printers also provide students a more efficient and viable option for working on long-term projects. Graduate student Gordon Stewart said that during his undergraduate days, creating physical copies of models for his classes was tough because the machine shop was overtaxed and difficult to use for most students.

“Being able to (create a model of) anything and print it out – and maybe it doesn’t work – but you can just print out another one, is super valuable,” Stewart said.

“The 3D printers get rid of those time crunches,” Benitz added. “You need to schedule all this time in the machine shop to make this product, (but) you could build it on the order of hours here and tweak it and rebuild it.”

While some of the more obvious uses of the 3D printers are for students and faculty in science, mathematics, engineering and technology fields, Schafer said that students and faculty from all disciplines would be able to use the center to bring their work to life. In particular, he believes business and architecture students can use the center to create advertising and design models, respectively.

According to Schafer, one professor in the classics department has even expressed interest in recreating objects from the ruins of Pompeii.

In the landscape of higher education, MakerBot Vice President of Professional Services Jordan Brehove said that the UMass MakerBot Innovation Center would serve as a “beacon” for other universities looking to leap into the 21st century.

“Some say that design is the new literacy,” said Johan Broer, a MakerBot representative. “Universities see that they have to prepare students for the future; it’s important for them to learn about this technology.”