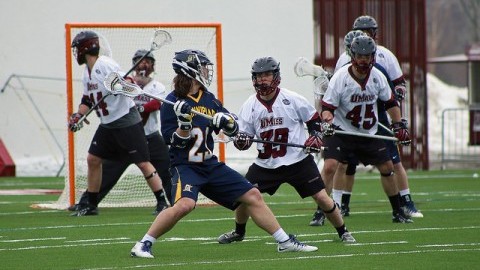 The Massachusetts men’s lacrosse team allowed Hofstra to take a 1-0 lead at the 13 minute, 29 second mark of Saturday’s first quarter.

That was the only time the Minutemen (3-5, 1-0 CAA) would trail in the contest however, in a 9-7 UMass victory in Hempstead, New York.

Five consecutive goals and a late defensive stand pushed the Minutemen’s win streak to three and marked their first conference victory of the season.

After Mike Malave gave the Pride (3-5, 0-1 CAA) an early lead, UMass went on a scoring spree behind two goals each from Nick Mariano and Gianni Bianchin and another from Brendan Hegarty to give the Minutemen a 5-3 lead at the half. Following two scoreless outings heading into Saturday, Hegarty finished with a hat trick to lead UMass offensively.

“It was a good team win,” Minutemen coach Greg Cannella said. “We buckled down throughout the game defensively and had some pretty good performances from Kyle (Karaska) and the rest of the defense.”

Cannella commended goalie Zach Oliveri’s play in preserving the win in a low-scoring affair. The junior finished with 13 saves.

“Zach was excellent today in goal with Brendan (Hegarty) scoring three goals in the offensive end, so we had timely scoring and were good on the groundballs,” Cannella said. “It was a hard fought win against a really good Hofstra team.”

Despite the defensive battle, UMass scored five goals on an efficient 13 shots in the first half and added three more on seven attempts in the third quarter. Cannella praised his offense, acknowledging that the Minutemen had to adapt to the Pride’s methodical style of play.

“We’d like to score more and have more opportunities to score but we kind of played to their tempo,” Cannella said. “Hofstra has long possessions on the offensive end, so we needed to do the same thing on our end. They played real good defense against us so they limited our opportunities but again, we had some really timely opportunities.”

With a little under three minutes remaining, Hofstra had a chance to cut the deficit to one, but the UMass defense stymied the Pride and gained possession to close out the game.

“They were good all day,” said Cannella regarding the play of his defenders. “(Hofstra) scored four man-up goals, so you’re looking at three six-on-six goals. So they were good all game long.

“They played some long possessions but they persevered and hung in tight, with Zach making saves when he needed to.”

With 6:56 to go, Hofstra cut the Minutemen’s lead to 6-5 but UMass quickly pushed the advantage back to four on a goal from Andrew Sokol and two more from Hegarty.

But it was man-up opportunities that allowed the Pride to stay competitive Saturday. Hofstra finished 4-for-8 in penalty situations, including two unanswered goals in the final eight minutes to reduce the deficit to two.

“They have three or four guys that could really bring the ball and that’s what they did,” Cannella said. “If you can shoot from the outside on an extra man, you’re gonna have some opportunities.”

Now that conference play has begun, UMass will look to continue its win streak when it heads to Maryland next weekend to face Towson. After losing five straight to open the season, Cannella said it’s important to carry its momentum into CAA play.

“Regardless of if it’s conference play or not, when you lose five in a row everyone wants to turn around,” he said. “The effort and preparation the guys have put forth is what has gotten us going here.”