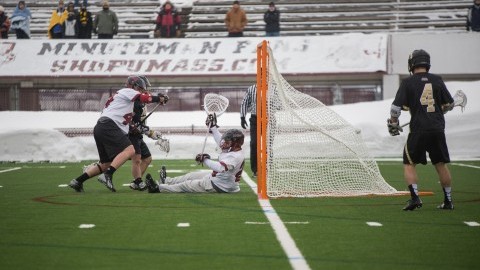 The Massachusetts men’s lacrosse team knew it was preparing for a low-scoring game in Saturday’s matchup with No. 18 Towson, the nation’s fourth-ranked defense. And after a 6-5 loss to the Tigers a season ago, the Minutemen headed into this weekend confident they could reverse their fortunes behind their own improved defense.

“That’s the tempo that Towson wants, that’s what they got,” UMass coach Greg Cannella said. “They played the game they wanted, slowing the game down.”

With scoring at a premium on both sides, the Tigers tallied five out of the first six goals Saturday, building a 5-1 advantage midway through the third quarter. The Minutemen then responded with a pair of goals to go on its only run of the game, shrinking the deficit to two with 10 minutes, 53 seconds remaining in regulation.

But Towson sealed the victory with 4:07 left with a goal from Joe Seider, moving the lead back up to three and ceasing any momentum UMass may have built down the stretch.

Seider’s goal came after the Minutemen failed to capitalize on an extra-man opportunity. On the ensuing Tigers attack, the sophomore attacker converted on a far strike just as the 30-second shot clock warning was issued.

“I don’t think it was a mistake on anyone’s part, I think we were just a step too slow,” said UMass defender Kyle Karaska about the final goal.

Cannella added: “We were a man up and we missed an opportunity to score on a point-blanker. So that’s where the momentum went. Then they went down and scored that goal…That kind of put it away for them.”

Despite the loss, Cannella said that Saturday’s defensive performance “absolutely” was a positive takeaway. The six-goal performance marked the unit’s fourth straight game holding an opponent to single digits.

“Zach (Oliveri) played well, the defense played well and stayed to their assignments,” Cannella said. “We just couldn’t score the ball on the other end of the field. But those guys are pretty tired right now.”

Karaska agreed, saying that the Minutemen’s defense did a decent job in battling with one of the nation’s top defenses. He added that the performance was overshadowed by Towson’s execution down the stretch.

“Their defense just did a good job of forcing our offense into a few bad shots,” Karaska said. “I think our offense did a good job in finding opportunities but they have a great goalie and a great defense and I think in the end, they just made a couple more stops than our defense did.”

Although UMass held the advantage in shots (32-to-25), groundballs (33-to-27) and faceoff victories (7-to-6), Cannella said that the amount of turnovers (13) was detrimental to the Minutemen’s attack.

He emphasized the harmful effects of turnovers following defensive stops, which forced UMass into playing extra time in its own zone.

“We didn’t get off to a good start and we turned it over,” Cannella said. “We turned it over three times off of stops. So that’s sort of disheartening because then you’re going back and playing a lot of defense again.”

The abundance of Minutemen turnovers allowed Towson, who plays with a slow, methodical offensive style, to kill time and limit UMass’ opportunities on attack.

The Minutemen’s three goals was the lowest single-game total in CAA play since 2009. Grant Whiteway (two goals) and Nick Mariano accounted for the tallies.

Mariano’s goal in the fourth quarter marked his team-leading 18th goal of the season and continued his 22-game scoring streak that dates back to his collegiate debut in last year’s season opener.

With Saturday’s loss snapping UMass’ three-game winning streak, the Minutemen will next try to return to the win column in its return home to McGuirk Stadium on Saturday, April 4 against Fairfield.