UMass notebook: Minutemen come up a play short, Clark shines in the loss 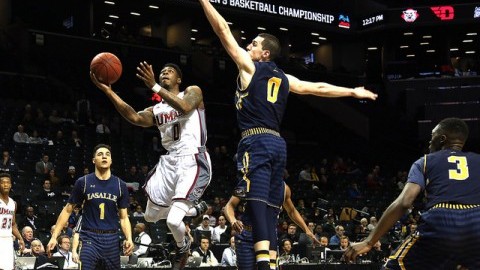 NEW YORK –– The ending of Thursday’s game for the Massachusetts men’s basketball team was one it has grown too familiar with throughout the course of the season.

UMass came out of the gates strong and made some runs in the second half. However, in the end, it just fell flat on its face and didn’t have enough left in the tank to pull away.

Unless the Minutemen receive an invitation to the National Invitation Tournament, their season likely ended Thursday in a 76-69 loss to La Salle in the second round of the Atlantic 10 tournament at Barclay’s Center.

Good basketball teams find ways to win those types of back-and-forth games. UMass had more than its fair of opportunities to pull ahead, but in the end it simply didn’t have enough left in the tank to make the final push.

“It didn’t quite end like we wanted it to. A few times I thought we had the opportunity to pull away but we took some tough shots and didn’t make some plays,” coach Derek Kellogg said.

After cutting the La Salle lead to 64-63 following a 3-pointer from Donte Clark, Explorers guard Khalid Lewis made a fade-away 3-pointer as the shot clock was winding down to put the Explorers ahead 67-63 with 1:35 remaining. The Minutemen failed to make it a single possession game after Lewis’ shot.

“I thought we were going to win honestly. And then the play that was kind of a gut-wrenching punch in the face, stomach, whatever you want to call it was the three in the corner with the shot clock winding down,” Kellogg said.

“Some years, those go your way. We’ve had that happen for us many, many times this year and even in the past, and sometimes when you’re on when you’re not playing, winning as many games as you would like, those seem to be the opposite way,” he added.

La Salle made 9-of-12 free throws in the final 1:04 to secure the victory. Jordan Price, who finished with 28 points and made 14 free throws, hit five during that stretch.

Clark did his best to keep the Minutemen in the game and was the clear-cut go-to player in the second half. Clark led all UMass scorers with 23 points and also added six rebounds, five of them offensively which led to put-back layups.

“It’s been a conscious thing for me for a while to try to get him going, because I think he’s a kid that has a good upside and can really score the ball, somebody who should be some double digits most of the time,” Kellogg said.

“What I was really happy to see was the offensive rebounding in his putbacks. That was something he hasn’t done and then some of the drives he made in tough plays was nice to see. He was probably our best offensive player hands down for most of the game.”

Clark scored 15 of his points in the second half.

In his final collegiate game, Cady Lalanne finished with 17 points and 16 rebounds, seven of which came on the offensive end. However, Lalanne picked up his fourth foul with 4:45 remaining and was substituted in and out throughout the rest of the game.

“The one thing I’ll say about Cady and Maxie is they will be sorely missed when they are gone, like a lot of players who have come through,” Kellogg said of his seniors.

“Those guys, they have won a lot of games here, 20 games their first three years and almost 20 this year with the seventh-rated nonconference schedule in the country in a very tough league that I think is as tough as any out there.”

Explorers center Steve Zack (12 points and 13 rebounds) matched up with both Lalanne and Esho throughout the game. Zack made it a constant effort to front the two every opportunity he could, and while some lob passes were able to beat him over the top, did enough to prevent the two from changing the outcome.

“Cady, that guy’s a monster. I have the utmost respect for him. (We) battled all night,” Zack said.