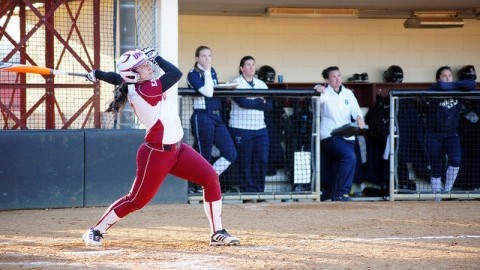 The Massachusetts softball team will have another day to figure out how to end its losing woes as Tuesday’s home opener against Connecticut was postponed to an undetermined date due to unplayable conditions at Sortino Field.

Wednesday’s home matchup against Yale, however, is still scheduled to be played on time at 4 p.m. until further notice.

The Minutewomen (5-15, 1-5 Atlantic 10) enter the week in rough shape. After starting the season with a passable 4-4 start, UMass has plummeted since, losing 11 of its last 12 games. Conference play hasn’t changed much either, as the team fell to a new low over the weekend by getting swept at Saint Joseph’s through three mercy rule shortened games.

Of course, it doesn’t help when the team’s 2014 A-10 Rookie of the Year recipient Jena Cozza goes down at the very start of the season to a year-ending ACL tear. It only made matters worse when veteran infielder Anna Kelley broke multiple facial bones in practice before the weekend series at Saint Joseph’s to keep her out indefinitely, along with starting outfielder Cote Clark.

The injuries and losses are piling up for the Minutewomen, which is a deadly combination that teams struggle to escape once the pattern starts. But with all of the signs pointing in that direction for this squad, however, UMass coach Kristi Stefanoni isn’t ready to give up on her group quite yet.

“Our biggest thing (moving forward) will be reflecting on the loss, letting it process and be really good at letting it go,” she said. “It’s how we’re going to get through this without spiraling downward. If (the team) wants to succeed, they really have to let go of failure quickly.”

Stefanoni looks at the rest of the season as a means of improving enough before the conference tournament at the year’s end. In a light-hearted moment, the second-year head coach explained the position the team is in and what is to come, through a fortune cookie she opened at a recent team dinner.

“Mine happened to say, ‘Success is a journey, not a destination,’” she said. “Sometimes we’re trying to get there a little too quickly, and (the message) is right. Doing what we’re doing, and how long the season is, is going to be quite the journey.

“(We) really are a very good team,” Stefanoni added. “We’ve only showed flashes of that and the key for them is really just to let it go and play.”