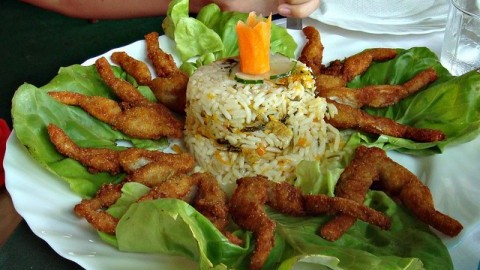 Studying abroad presents a unique opportunity to immerse oneself in a foreign country’s culture. It is a time to explore the world, meet new people and pursue an education in an unfamiliar place. Along the way students will inevitably be put into uncomfortable and unfamiliar situations and forced to determine their own paths.

Then they must ask themselves a question: “Am I willing to try new things?”

Food is a part of life many of us enjoy. Whether it be a juicy hamburger or a delicious cheesesteak, American food is a staple of everyday life. Cuisine around the world differs drastically, making traveling extra appetizing. But while the food may be to die for at one restaurant, another may throw you for a loop.

Every country has a signature dish. Pizza in Italy, macaroons in France, Belgian waffles in Belgium and churros in Spain are just a few examples of high-demand foods people seek out during their travels.

But foods that seem strange or bizarre to American taste buds are also considered common meals in other countries, as many University of Massachusetts students who have studied abroad found out.

Caoilfhionn Schwab, a sophomore currently abroad in England, decided to try black pudding – a type of sausage – on a whim when she first came across it. Commonly eaten in Britain and Ireland, it is made from pork blood and oatmeal to absorb the blood.

“It was pretty bizarre,” Schwab said. “I didn’t know it was black because of blood but once my coworkers told me, I promptly spit it out.”

During his time in Paris, sophomore Matt Merlino ate cow stomach and said it was “delicious.” He also indulged his taste buds with escargot (snails), cuisses de grenouille (frog legs) and pig’s blood.

Additionally, Merlino recalled trying foie gras, which is made from a fattened duck or goose liver. The goose or duck is force-fed corn through a process known as “gavage” to make the liver more appetizing. It is then prepared into a mousse or a parfait and is described as rich and delicate.

“Basically they force-feed a goose until it dies and remove its enlarged liver,” Merlino said. “(It’s a) really bizarre taste, but very tasty.”

While these foods may be foreign to some – and probably seen on an episode of Fear Factor at some point – they are highly desired in other countries.

Jenna Halloran, a UMass alumna, studied abroad in Italy during her junior year. While she was there, she tried octopus pizza and sipped on hot wine in Prague.

“It was strange but so good,” Halloran said.

While she was in Pompeii, Halloran said that she also drank lemonade from lemons the size of coconuts off of a vine.

Ariana Starling, a sophomore studying in Cape Town, South Africa, said she did not expect to be eat so much ostrich. During her trip, she has eaten ostrich steak, ostrich burgers and ostrich eggs for breakfast.

Ostrich meat is similar in color and taste to beef. Low in fat and cholesterol and high in protein, ostrich meat is one of the healthiest meats.

Dan Metcalfe, a sophomore, indulged in lamb kidney during his time in London. Although Metcalfe said he wasn’t too fond of the taste, many people enjoy its rich flavor and juiciness. Typically used in meat pies, lamb kidney is high in protein and cholesterol.

But students should take advantage of the opportunity to try each new and exotic food they can. You never know, you might love it.

Danielle Aihini can be reached at [email protected]