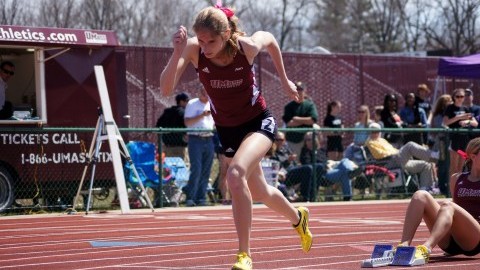 The Massachusetts men’s and women’s track teams will be sending fewer athletes to the ECAC and IC4A championships than they have in years past but will still boast plenty of talent in their respective fields this Friday and Saturday.

The Minutewomen compete in the ECAC championships this weekend and are headlined by three individual performers in Rachel Hilliard in the 3,000-meter race, Heather MacLean in the 800-meter and Ashley Palmer in the long jump. UMass also sends two relay teams in the 4×800-meter and distance medley relay.

“We are focusing on high performances from the small group of athletes there,” Minutewomen coach Julie LaFreniere said. “You don’t want enthusiasm or urgency to drop at this point.”

Hilliard has a chance to break the 3,000-meter record in the last indoor meet of her college career. The senior will compete in a deep field on the final day of the meet.

Despite the tough competition, LaFreniere said that only competing in the single race – Hilliard usually participates in multiple events – will benefit Hilliard and keep her fresh.

“I think Rachel has a really good 3,000 (meter) race in her,” Lafreniere said. “She’s going up against the deepest distance running region in the nation and she’ll be fresh when she runs it.”

LaFreniere added that she is optimistic about MacLean’s chances at success in the 800-meter race. MacLean could be seeded toward the top in the event if certain national qualifiers do not attend the competition.

Like Hilliard, MacLean will be limited to just the one race this weekend.

While both Hilliard and MacLean were major contributors in the 4×800 and distance medley throughout the season, their absences in relays this weekend provide opportunities for Carly Zinner, Courtney Neves, Krista Webb and Colleen Sands, according to LaFreniere.

“This is a good chance for some of the upper and lower classmen teammates to step up in a big moment,” she said.

The two-day tournament in Boston kicked off Friday morning.

The Minutemen send five athletes to the IC4A championships, also held in Boston.

With Ness being the only senior on the relay team, the Minutemen’s youth is apparent among its qualifying athletes. As a result, the theme of gaining experience for the team during the championship season continues, said UMass coach Ken O’Brien.

“We have to develop the core of the team in order to start climbing the ladder in major meets like this,” O’Brien said. “For a large percentage of college teams, their success is linked (to) how old they are, which comes with more experience and maturity when dealing with 18 to 23-year-olds.”

With the Minutemen coming off of the Atlantic 10 and the New England championships the past two weeks, physical and mental fatigue is a concern. But O’Brien said he’s confident that his athletes have been performing well and can carry the success over for one more week.

“This meet is an opportunity for our team to test the best we have against top competition,” O’Brien said. “This meet can help the coaches and athletes assess what worked for them and what didn’t this season, and what got them to this point.”