UMass women’s basketball optimistic for what the future brings 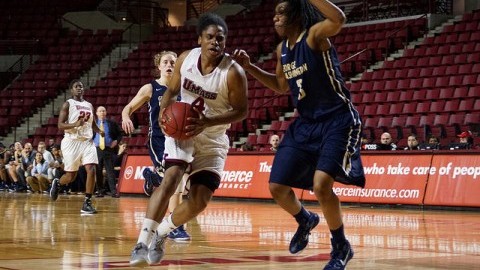 Most teams wouldn’t be satisfied with a 12-win season, but for the Massachusetts women’s basketball team, it represents a positive step forward for the program.

The loss served as a microcosm of the season for the Minutewomen: a team which competed well but couldn’t finish the job in the end.

Despite the defeat, coach Sharon Dawley said she could not be more proud of her team this season.

“The record we had doesn’t show how much improvement our ladies made this season,” Dawley said. “We were a team that nobody expected to make any noise, but we proved people wrong with our play on the court and that is a product of the hard work we put in.”

UMass had three seniors on the roster that will need to be replaced: guard Emily Mital, forward Paula Tarnachowicz and forward Kim Pierre-Louis. Pierre-Louis will be the biggest loss for the Minutewomen next season.

The senior finished her collegiate career with 1,099 career points, placing her 17th all-time in UMass history. In her senior season, she averaged 18.4 points per game and 7.5 rebounds a game.

“Obviously Kim is going to really hard to replace,” Dawley said. “Players that have her work ethic don’t come along very often, so we know her loss will be difficult.”

Mital finished off her Minutewomen career with 728 total points while succeeding in the classroom as well. She was recently named to the A-10 all-academic team and was a mainstay on UMass’ and the A-10’s honor rolls during her tenure with the Minutewomen.

Tarnachowicz finishes her career with 45 points in her two seasons at UMass.

Despite losing three seniors, the team returns a number of significant contributors. Most noticeably, the Minutewomen are optimistic about their rising sophomore class.

By the end of the season, two of the team’s starters were freshmen in guards Cierra Dillard and Leah McDerment.

“I couldn’t be more proud of what the young girls on this team did,” Dawley said. “They really took to the senior leadership on this team and improved greatly.

“Cierra came in and produced at high level for us. By the end of the season, her confidence was way up and she was routinely scoring in double digits for us.”

Dillard looks to be a future offensive leader for UMass, scoring 319 points this season. If she keeps up this pace, she could join her teammate Pierre-Louis in the 1,000-point club.

McDerment averaged over three points a game and did a solid job facilitating with 2.1 assists a game.

In addition to these underclassmen, Rashida Timbilla will return for her senior season. The forward averaged 8.3 points per game and 9.6 rebounds.

“Many people are going to look at the loss of Kim and say they are going to go right back to the bottom of the conference but I think those people will be really surprised,” Dawley said. “With that added year of experience for our younger players and a batch of incoming freshman, I think we can make a lot of noise next year.”