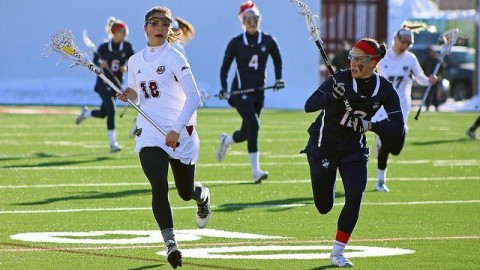 The undefeated Massachusetts women’s lacrosse team has been preparing for Wednesday’s matchup against Yale without taking records into account.
Instead, UMass (6-0) coach Angela McMahon said that concentrating on areas of improvement is the main focus.

“Being undefeated doesn’t really mean anything to us because we are trying to take everything game-by-game and really focus on getting better,” McMahon said. “Instead of the record numbers, we focus on our statistics.”

“They are really solid all around, with a very conservative defense,” Ott said. “We need to really work toward getting open looks by a lot of movement.

“We are working hard to prepare for playing under pressure.”

Yale’s defense is led by Christina Doherty, who ranks second in the Ivy League in caused turnovers per game (1.60).

McMahon identified the Bulldogs as a tall team with several legitimate scoring threats on offense as well. Six players stand above 5-foot-10.
Kerri Fleishhacker, Tess McEvoy and Erin Magnuson highlight a potent Yale attack. Both Fleishhacker and McEvoy have scored 10 goals this year while Magnuson has nine goals.

“We need to get our sticks up in the passing lanes and making sure we are aware if a bigger player is planted in the middle. We need to be super aware,” McMahon said. “It is going to be more about getting good pressure, about their better players so that we can limit their involvement.”

But if previous matchups provide any indication, UMass will be up for the challenge. The Minutewomen currently boast the top-ranked defense in the NCAA and lead the nation in goals allowed average (4.33) and turnovers caused per game (14).

“Our defense is extremely unselfish, they don’t care who makes the play,” McMahon said. “They play well together, communicate well together and are always on the same page.”

Ott added that UMass’ defensive strength stems from its effort that the upperclassmen leaders put in. The defense is led by junior twins Kate and Anne Farnham and senior Morgan Walker.

On the attack, the Minutewomen will rely on Ott, Erika Eipp and Hannah Murphy to continue their successful seasons. The trio has combined for 28 goals and 35 total points through six games.

Ott said that she’s been particularly impressed with Murphy, a sophomore with 13 goals.

“She is so skilled in so many different parts of the game,” Ott said. “Her shooting has been one of the best on the team. Also, she is one of the draw specialists for the team and on defense she is doing really well.

“Our attack was having shooting issues and she stepped up and helped out.”

Wednesday’s game in New Haven, Connecticut will begin at 4 p.m.