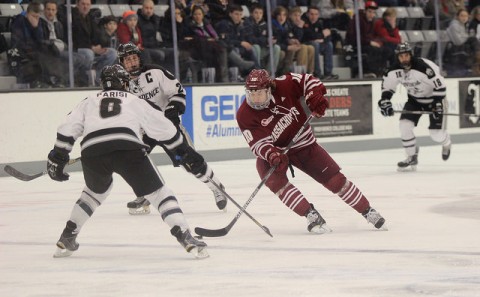 At 7:35 p.m., the Massachusetts hockey team began its game versus Notre Dame in the first round of the Hockey East tournament.

It took eight periods of hockey and nearly six hours before a winner was finally declared at 1:25 a.m.

It set the record for the longest NCAA hockey game of all time at 151 minutes and 42 seconds, was the Minutemen’s first postseason win since 2009 and provided them a 1-0 lead in the best-of-three series.

“I’m mostly proud and happy for our guys to stick with the game plan,” coach John Micheletto said. “Down 3-1 on the road in a difficult building against a really good team, for us to continue to do what we do and have been doing so well despite the scoreboard not reflecting that, it’s really gratifying and I’m glad they were rewarded for doing it the right way for so long.”

On the 90th shot of the night for UMass, Walsh buried a rebound after a shot from freshman Dennis Kravchenko bounced off Irish goaltender Cal Petersen and ricocheted into the slot, where Walsh was waiting. It was Walsh’s 11th goal in his last 15 games.

When he saw the puck sail into the back of the net, only one thing came to Walsh’s mind: relief.

“I think all the boys were pretty tired, so I was just relieved that it went in,” he said. Obviously it was an exciting moment, but we have to come back tomorrow and play another good game.”

“I think I just stood there, I was too tired to move,” Mastalerz joked when asked how he felt after Walsh had scored. “It obviously felt good, it was a long game.

“It’s tougher for goalies to stay focused for however long the game goes. I’m happy to end the night with the win. that’s all that matters.”

As the game progressed, Mastalerz continued to make clutch saves, giving the Minutemen a chance to win. His 75 saves broke the UMass single-game record of 51 set by Brian Regan back in 1995.

“I think in the second and third overtimes alone pucks were just going to the net and weren’t really grade-A scoring opportunities and it was more of guys being tired and trying to create some rebounds,” Mastalerz said. “My main goal was to just trap the puck under my body and what I told myself to do. It was a great team effort.”

“I’m sure it was a difficult night for goaltending with the gear as wet as it was and getting up and down,” added Micheletto. “Obviously there were chances on both sides and he certainly gave us an opportunity to win as the game wore on so it was an impressive performance by him.”

UMass erased two separate two-goal deficits after trailing 2-0 and 3-1, showing its ability yet again to fight its way back into a game.

“I think it shows a lot of fortitude and togetherness in a lot of our guys,” Micheletto said. “They really stayed in contact with each other, communication through a game like that when fatigue starts setting in, we were really connected and that was an important part in our victory.”

Added Walsh, “We got down 3-1 and no one on the bench was deflated or anything. We kept positive energy and were able to tie it. Throughout each intermission in the locker room guys were just really excited and ready to get back out and play another period.”

Perhaps buried in the numerous storylines was the play of UMass sophomore Steven Iacobellis, who scored UMass’ first two goals of the game. Senior forward Troy Power scored the final goal, redirecting a shot into the net with two seconds left in the second period to tie the game at 3-3.

Micheletto credited his team’s puck movement as a successful part of the game plan, as well as his team’s cycle play and performance with the man-advantage.

“When all those things were put together it led to a pretty good offensive performance for us,” he said.

With this game now in the history books, UMass will now have to face the task of a very quick recovery as they attempt to close out the series

“Obviously guys are managing their recovery night and are excited, so we’ll deal with tomorrow, tomorrow,” Micheletto said. “Having what we went through tonight, I don’t anticipate that our guys are going to be lacking in focus knowing what’s on the line.”

Correction: A previous version of this story attributed all three goals to Steven Iacobellis. The goal has since been changed and awarded to Troy Power, which the story now reflects.