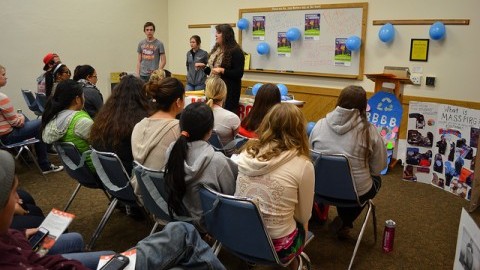 At the kick off meeting in 2013, Chapter Chair Shawna Upton talks to the group about the Bottle Bill. (Collegian File Photo)

At a time when its work has begun to pick up both local and national momentum, MASSPIRG unveiled the new campaigns it will focus on during the 2015-2016 academic year at its state board meeting on April 11.

The campaigns for the University of Massachusetts Amherst chapter will focus on saving antibiotics, textbook affordability, higher education and student debt, hunger and homelessness, and solar energy.
Recently, the work of the Save Antibiotics campaign has been splashed across the headlines as McDonald’s announced that it has committed to using chicken meat free of antibiotics within the next two years.

“It was the nationwide campaign this semester and it was really cool to watch how quickly we actually got a big win in terms of getting McDonald’s to commit to antibiotic-free chicken,” said Lucas Rockett Gutterman, state board treasurer. “I remember when we were tabling on this issue. People would be like ‘McDonald’s?’ (They were) really incredulous that we could make a difference on that.”

This success has pushed MASSPIRG to extend the campaign’s reach.

At the meeting, the Save Antibiotics campaign was voted as the statewide campaign by the chapters. In addition, MASSPIRG will now refocus its sights to Subway, which has more franchises around the world than McDonald’s.

“Our target is switching to Subway, specifically because we think they should live up to their branding of ‘eat fresh,’” Gutterman said. “If they are pedaling their food as healthy, they shouldn’t be encouraging the spread of antibiotic risks and bacteria which kills 23,000 people every year.”

While the Save Antibiotics campaign has some of the most visible and large-scale goals, Gutterman and Brett Mallard, coordinator of the Hunger and Homelessness campaign, have high hopes for the other campaigns as well, albeit with different kinds of goals.

“Different campaigns are taken on with different understandings of the changes that we can make,” Gutterman said.
He said the Affordable Textbooks campaign, the statewide campaign for this current year, is aiming to get 10 UMass faculty members to convert to using open source textbooks or education resources next year.

For the Hunger and Homelessness campaign, Gutterman said most of the work is service work. However, according to Mallard, the campaign does have a long-term goal of creating a food pantry on campus large enough to accommodate all students in need of food assistance. Mallard said MASSPIRG has been in contact with the administration and the Amherst Survival Center, both of which have shown interest in the project.

In terms of the Higher Education and Student Debt campaign, Gutterman, the coordinator of this year’s campaign, believes that the focus of next year will be educating people about the problem, so that concrete policy can be worked on in years to come.

While the Solar Energy campaign is relatively new, it already has a concrete agenda for next year. According to Gutterman, the plan is “to get Gov. Charlie Baker to commit to 20 percent of Massachusetts’ energy coming from the sun by 2025.”

Only the Solar Energy campaign is new for next year, meaning all other campaigns are a continuation from last year’s work. This is something that Mallard believes will put next year’s efforts ahead of schedule.

“We are running a lot of the same campaigns with the same coordinators,” Mallard said. “(Next year) they will start with some progress.”

MASSPIRG’s confidence does not only come from its validation on the national level for its antibiotic work or the promise of its other campaigns. It also comes from the continued support it receives from the student body at UMass.

In the spring Student Government Association election, a ballot question regarding student support of the continued existence of the MASSPIRG chapter at UMass through an $11 per student per semester waivable fee passed easily, receiving nearly three times as many votes in support as it did in opposition.

“I think we are well-received,” Mallard said. “There seems to be more involvement with (Registered Student Organizations) and we are looking to keep that up.”

Gutterman said 50 students were involved in MASSPIRG’s reaffirmation drive to help support the ballot question pertaining to it, and added that 15 to 20 members attend weekly core team meetings.
“(MASSPIRG) is very visible on campus,” said sophomore Lily Wallace. “They have good name recognition.”

“They have a heavy social media presence,” added sophomore Patricia Murphy. “Even if people don’t know what they do, they know that they exist.”

Although MASSPIRG does not necessarily focus on administrative policy or other on-campus matters, as other student groups do, Gutterman and Mallard believe that its work will continue to appeal to students.

“We think the issue is really profound,” said Gutterman of the Save Antibiotics campaign. “It’s a public health issue. It’s something we think will resonate with the student body. (The campaign targeting McDonald’s proved that) having students speak out against their practices or work is really effective.”

“People understand that we are trying to work for them,” Mallard said.