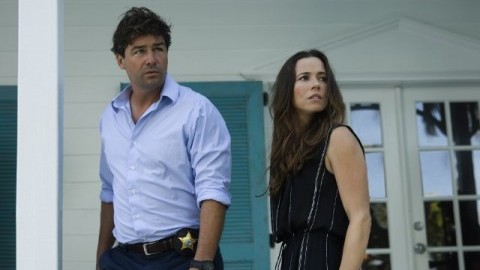 “Bloodline” is Netflix’s best original series yet. When you take recent offerings like the perfectly pleasant “Unbreakable Kimmy Schmidt” and older, acclaimed shows like “Orange is the New Black” into consideration, this statement conveys the true quality of this show.

Before I get to the series’ plot, I must say “Bloodline’s” cast is absolutely incredible. With an ensemble that includes the monumentally engaging Kyle Chandler (“Friday Night Lights”), Linda Cardellini (“Freaks and Geeks”), Ben Mendelsohn (“The Place Beyond the Pines”), Sissy Spacek and relative newcomer Norbert Leo Butz, this is a cast to die for. From an acting point of view, this show really is spectacular.

Mendelsohn plays Danny Rayburn, the prodigal son who returns to his family, which includes his mother Sally (Spacek), brothers Kevin and John (Butz and Chandler, respectively) and sister Meg (Cardellini). Mendelsohn is perfectly cast as the seemingly reformed long-lost brother who claims to have left his old, drug-induced ways and to simply want to be part of the family again. He exudes a genuine sense of anger and really hits the nail on the head when Danny becomes more threatening later on in the season.

Each sibling leads his or her own life. John is a cop, Kevin takes care of the family’s boat rentals and Meg is a lawyer. In addition to doing their job every day, the three siblings help their parents run a resort in the beautifully shot Florida Keys. Then Danny shows up, bringing with him old family resentments, anger and hostility.

I have two large issues with the show as a whole, two problems that prevent it from truly being something special. Firstly, the show’s tagline is “We’re not bad people, but we did a bad thing.” That bad thing is revealed to us in the pilot episode. Similarly to the structure of any given season of “Damages,” “Bloodline’s” pilot flashes into the future. These quick flashes reveal that John will kill Danny eventually, and the rest of the season leads up to that moment of fratricide.

This device is useless. In fact, it’s reprehensible. It seems to have been stuck into the pilot as a way of keeping its audience’s attention for the long, exposition-filled first episode. This is cheating. If your show isn’t captivating enough to convince an audience to stick with it without the use of gimmicky time-bending devices, the problem lies in its very premise.

What’s worse, “Bloodline” is perfectly interesting enough to hold one’s attention without the flash-forwards. There is absolutely no valid dramatic reason for the gimmick whatsoever. In fact, when the moment finally does come, in which John kills Danny, the drama would have been much more effective if it was a surprise to the audience rather than something we are told will happen from the get-go. The most important emotional moment of the season is given away from the very start, and it is a big problem.

The second big problem with “Bloodline” is the character development of Danny Rayburn. The ‘big bad’ of the season, Danny returns home as the catalyst for pretty much everything that takes place subsequently. For the first few episodes, he really does seem like a changed man, and his siblings’ inherent distrust of him feels unwarranted.

However, at some vague point in the season, it’s like a switch is flipped and all of the sudden Danny is a real villain who tries to ruin his siblings’ lives. There is a plot contrivance in the form of some old cassette tapes that I assume the show’s creators intended to be the reason for Danny’s change of heart, but it isn’t developed in a fluid enough way for that to be a satisfying explanation.

Overall, it still works. Kyle Chandler is endlessly charismatic, as anyone who watched “Friday Night Lights” would assume. Norman Leo Butz is one of the best parts of the show right out of the gate as Kevin. As soon as Danny shows up, Kevin is the least trustful of him – he’s worried about Danny’s intentions from the start, more than his other two siblings. We don’t know why Kevin feels this way about him. His actions make sense to us, however, as Butz puts his terrific physicality to good use, conveying the long and storied history Kevin and Danny must share without having to use much exposition.

Throughout, Mendelsohn’s performance is pure gold. He completes every task with aplomb. When Danny’s supposed to be coming off as genuinely repentant early in the season, we feel for him and hope he gets what he wants. When he’s threatening his niece’s life in the latter half of the season, we’re terrified of him. At that point we absolutely loathe the character. It’s too bad the writers don’t find a steady balance between Danny’s two modes. If they had, they’d have created a terrific, perhaps iconic, breakout television character.

As it is, “Bloodline” remains Netflix’s best show yet; “Marco Polo” and “House of Cards” don’t come close. Individual moments work excellently well, it plays fantastically with a great supporting cast, it exposes the great acting chops of Norman Leo Butz to the world and it puts Kyle Chandler back on our TV screens. While I still have reservations about the show, I did enjoy watching it and am looking forward to season two.

Eli Fine can be reached at [email protected] and followed on Twitter @ElazarFine.