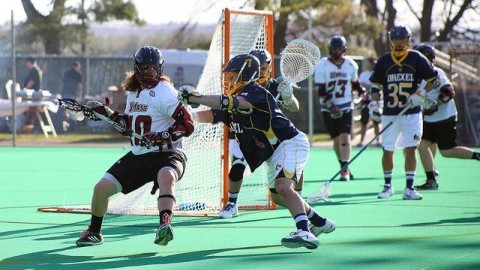 The Massachusetts men’s lacrosse team honored its seven seniors prior to Friday night’s season finale against Delaware. But it was a member of the Blue Hens’ senior class who shined the brightest under the lights at Garber Field.

Senior goalie Brett Anton finished with 18 saves Friday to lead the way for Delaware (5-10, 1-4 Colonial Athletic Association), who played spoiler for the second consecutive season against UMass (4-9, 2-3 CAA) in a 10-9 victory.

With the Blue Hens already out of playoff contention heading into the matchup, Anton finished his collegiate career on a high note, setting a career-high in saves while facing 44 shots from an aggressive Minutemen attack.

“He played lights out,” UMass attacker Nick Mariano said. “He had nothing to lose, so congrats to him. It was a great game for him.”

Anton started in just his fourth career game in four seasons for Delaware. After initial Blue Hens starter Conor Peaks struggled for much of the season, Anton stepped into the starting role for the past three games and kept Delaware in competitive battles.

In his first two starts prior to Friday’s victory, Anton stood strong in back-to-back overtime losses to Drexel and Fairfield. Against the Stags, Anton finished with 15 saves in a double overtime defeat.

“He hung in there and played well, so you give him credit,” UMass coach Greg Cannella said of Anton’s performance. “He’s been solid for those guys all year long.”

While Minutemen senior midfielder Ryan Izzo also acknowledged Anton’s effect in Friday’s game, he added that UMass failed to capitalize on enough opportunities from close range and in transition.

Inconsistencies continue in cage and the faceoff circle

Anton’s counterpart in goal, UMass junior Zach Oliveri, struggled to match Anton at the back end of the Minutemen’s defense.

A week after posting one of his best performances of 2015, making 14 saves – including a number of high-quality stops – in a 12-9 victory over Drexel, Oliveri lasted only one half against the Blue Hens before being relieved.

The junior stopped four shots and allowed seven goals in 30 minutes of action. Backup D.J. Smith then replaced Oliveri at the beginning of the third quarter following a 4-1 Delaware run in the second frame that gave the Blue Hens a 7-3 lead.

“With Zach…it’s one week to the next week,” Cannella said about whether he was concerned with the play in net. “It’s very frustrating for us as coaches and I’m sure it is for those guys as individuals.”

UMass saw similar inconsistencies in the faceoff battle as Delaware held the 14-to-8 advantage.

With freshman Noah Rak sidelined for the rest of the season due to injury, Charlie Schatz has assumed the role as top faceoff option for the Minutemen and stands at 54 percent. The sophomore won 3-of-11 in the faceoff circle Friday night.

Despite the loss, UMass still clinched a berth in the CAA tournament Friday after the final whistle sounded in Fairfield’s 5-4 victory over Hofstra.

UMass, Hofstra and Drexel entered the weekend in a three-way tie fighting for the last two spots in postseason play. Since the Minutemen owned the head-to-head tiebreaker against both teams, the Pride’s loss handed UMass at least the No. 4 seed.

“You don’t want to back into (the tournament),” Cannella said. “I thought we blew an opportunity but Delaware played really well.”

Izzo said that while Friday’s loss was a missed opportunity to build a winning streak and further momentum heading into the tournament, he added it provides a source for motivation as an expected underdog.

“It’s motivation going into the playoffs by saying that any team could beat you,” Izzo said. “Delaware hadn’t won a game in the CAA but they came into today not quitting, not letting anything go. We have to use that as fuel.”

The Dragons host first-place Towson Saturday afternoon to finalize the conference tournament’s seeding. With a Drexel loss, the Minutemen would assume the No. 3 seed, while a Dragons win locks UMass in at No. 4.