‘Community’ is learning to adapt in season six 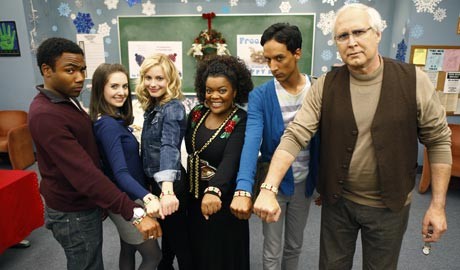 No television show has a more tumultuous past than “Community.”

This show about a community college study group (now turned “Save Greendale Committee”) has always been just on the brink of cancellation. This past May, NBC decided not to pick up a sixth season of the sitcom, but Yahoo, looking to get into the ring with Netflix and Amazon in the production of original content, swooped in to save the show.

The sitcom is headlining Yahoo’s streaming service, Yahoo Screen, and has aired seven episodes of its 13-episode season so far. The fans’ rallying cry of “Six Seasons and a movie!” has never been so close to coming true. The loss of original cast members Chevy Chase, Donald Glover and Yvette Nicole Brown however, had expectations tempered going into this season.

We meet Frankie in the first episode, titled “Ladders,” after the school’s roof collapses under the weight of hundreds of Frisbees, prompting the Dean (Jim Rash) to hire her as CFO to manage Greendale’s money. The Dean introduces Frankie to the group, which is immediately weary of her presence, as they see her as someone who wants to take control of and change Greendale.

Elroy is then introduced in the second episode when the Dean becomes obsessed with a virtual reality program he designed in the ‘90s. These episodes are a little awkward, as creator Dan Harmon is put in the difficult position of introducing new characters to a skeptical audience who wants their old favorites back, but Harmon and his writing team do good job of smoothly integrating Frankie and Elroy with these over-the-top, but very “Community” plots.

These episodes are the low-point in the season, but understandably so as they were mostly dedicated to introducing the new characters and had little time to spare as a result.

The season begins to find some of its footing by the third episode, titled “Basic Crisis Room Decorum,” as Annie, Jeff and the gang attempt damage control after City College, Greendale’s rival, produces an attack ad claiming Greendale gave a bachelor’s degree to a dog, which it turns out they didn’t even though it had enough credits to graduate.

This episode felt a little strange at times, particularly when Jeff argues that they should create an ad attacking the dog’s credibility as a response, and when Annie threatened to leave if they tried to get City College’s attack ad down. Both seemed just slightly out of character for the two of them.

Episodes four, five, six and seven have gotten the show entirely back on track. Hopefully the rest of the season will continue in the same way.

Chang (Ken Jeong) and Dean Pelton have become much integral to the show and the group, getting more interesting and full roles. Episode four is actually dedicated to both of these characters, as Chang is abused by Matt Lundergrad (Jason Mantzoukas), the despicable director of the stage adaptation of “The Karate Kid,” in which Chang has been cast as Mr. Miyagi.

Meanwhile, the Dean is offered a small promotion if he agrees to come out as openly gay so the school board will appear to be more diverse and accepting. The episode is an excellent foray into political correctness and shirking of stereotypes that allows Jeong and Rash to take their roles to the next level.

Frankie and Elroy really come alive in these most recent episodes, as well, and begin to feel less like newcomers and more like a part of the group. Frankie seems to be an amalgamation of Abed, Annie and Jeff. She has Abed’s social struggles, the uptight organization of Annie and Jeff’s bleak philosophical views of humanity. She is constantly taking a maternal role in the group. Elroy, on the other hand, is a perfect fit as we find out just how lonely he is. They are very much misfits who belong in this group.

This season so far feels a lot like getting to know a long lost childhood friend. Things may have changed a bit since the last time you saw them, but at their core is that same person you knew all those years ago.

“Community,” has seen a lot of change over the years and especially so this season, but it has learned to adapt well. Newcomers Brewster and David are wonderful additions, and they fit in well with the remaining core cast. With Jeong and Rash’s characters are being given more integral roles in the show, the show is starting to feel like a new version of the show fans have grown to love so dearly.

While some of the early episodes have felt a little out there even for “Community,” episodes four through seven show an excellent return to form, pointing to good things to come for the last half of the season.

Cory J. Willey can be reached at [email protected] and followed on Twitter @cojwilley.