Death Cab for Cutie delivers the necessary goods on ‘Kintsugi’ 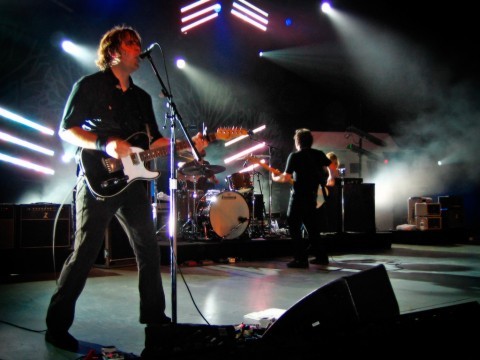 There’s something incredibly reassuring in the fact that, on its first record in four years, Death Cab for Cutie hasn’t changed a bit. Although former lead guitarist Chris Walla did assist in the creation of the record, “Kintsugi” is the first Death Cab album with someone other than him producing. That honor was given instead to Rich Costey, who has applied a blindingly glossy, radio-ready finish to records from the likes of Muse and Foster the People.

But, before you start crying, “sell outs!” keep in mind that this is Death Cab for Cutie. It had a chart-topping album seven years ago, before popular high school students started wearing big glasses and having arguments that featured each person trying to assure the other that they are the most awkward.

Like its predecessor, it has songs that will make hearts swell, and songs that lose their luster after a single listen. So, in terms of consistency, it is right along the lines of “Codes & Keys,” but musically, “Kintsugi” beefs up on the electronics. Perhaps to compensate for Walla’s departure, synthesizers dot the landscape of the album, interjecting melody or harmony where a lead guitar previously would have contributed.

One thing to take note of is Ben Gibbard’s return to the sky-gazing confessional method of songwriting that made Death Cab for Cutie the indie institution it is today. On the gorgeous opener, “No Room In Frame,” Gibbard, after vividly describing the landscape stretched out in front of him, sings, “this highway lived in mind/it takes me back to the place that made me.”

The song screams, “remember why you love us??” but it is a sales pitch that is a pleasure to buy right into. The guitars snake beautifully around Gibbard’s disclosures, with the rest of the band molding itself around the song just as easily.

“Black Sun,” the album’s lead single, is a tricky little piece. On the one hand, it’s textbook Death Cab, featuring guitars that are twisty, but stop just short of being angular and lyrics that are dark, but stop just short of being too morbid — “there is death upon the vine/there is fear in the eyes of your father/and there is ‘yours’ and there is ‘mine.’”

But despite the nifty electronics that emerge in the solid chorus, the song feels oddly hollow and grey. It is comforting territory, but without significant input from Walla it lacks the sort of depth listeners have come to expect from the band. Same goes for The Cure-aping track, “Little Wanderer,” which explores long-distance relationships with Gibbard’s familiar, literary sense of melancholy, but has a certain glossy emptiness to it.

But ironically, it is when Gibbard goes all-out schmaltzy that “Kintsugi” reaches its peak. “You’ve Haunted Me All My Life” is powered by an acoustic riff that is so prominent in the mix you feel like you’re going to be crushed by the weight of it. The chorus and production are pure, radio-friendly cheese, but the sort that Gibbard’s always excelled in.

He’s on similarly fine, heartstring-tugging form on the unaccompanied acoustic ballad, “Hold No Guns.” “My hands hold no guns,” he desperately tells a distant, seemingly retreating partner. Like in most of Gibbard’s finest songs, the romance here is close to perfection, but has a constant thorn in its side that keeps it spinning perennially off its axis.

“Good Help (Is So Hard To Find)” keeps with the album’s running 1980s theme. But unlike “Little Wanderer,” which owed its blueprints to the gloomy, arena-sized musings of The Cure, “Good Help,” with its danceable rhythms and bright chorus, owes more to bands like the Tom Tom Club. “Everything’s A Ceiling” echoes INXS with its big synths, cosmic guitar leads and stargazing lyrics, while “Ingenue” features a climactic drum fill that inevitably brings to mind Phil Collins’ “In the Air Tonight.”

So, “Kintsugi” is neither a step forward nor a step backward. Without Walla, Death Cab has indeed been diminished, but it’s not entirely out of the game. When surrounded by the right musical backdrop, Gibbard’s lyrics can still stop time without dipping into melodrama.

Though it may no longer echo the times as perfectly as they did a decade ago, Death Cab for Cutie still has a place in 2015’s musical landscape. By just sounding like itself, the band still stands out as one of rock’s most reliable craftsmen of glossy but emotionally substantial stories.