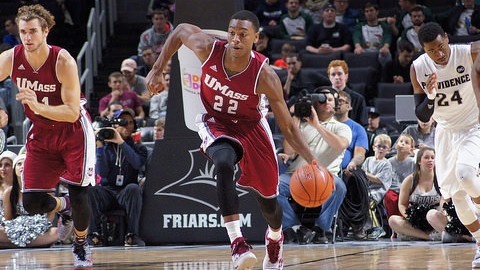 Massachusetts men’s basketball guard Demetrius Dyson will transfer out of the program, becoming the second member of the team to transfer this spring.

“I want to thank (UMass basketball), my teammates, the fans, and the entire coaching staff for 2 great memorable years, but I’ve decided to take my talents elsewhere next year,” Dyson posted to his Twitter account Saturday night. The news was initially reported by ESPN.

It’s unclear where Dyson plans to attend school for next season.

The 2014-15 season was an up-and-down campaign for Dyson.The 6-foot-5 sophomore guard averaged 3.3 points in 10.7 minutes per game this season and saw an increase in playing time near the end of the season, which included a 12-point performance in 29 minutes in a 78-72 loss to No. 25 Virginia Commonwealth.

However, Dyson admittedly struggled with his confidence at the beginning of the year and didn’t play as many minutes as some expected he would before the season began. He also struggled to carry his reputation as a strong 3-point shooter in practice over to games, where he shot just 25 percent. Still, Dyson offers considerable athleticism as a rebounder and defender on the wing and could thrive in a situation with more stable playing time.

It’s been an active year on the transfer market for the Minutemen. Dyson joins former UMass guard Derrick Gordon in seeking a new place to play next year. Gordon, who has one year of eligibility remaining, announced his intent to transfer in March. Last week, former Texas A&M forward Antwan Space announced he was transferring into UMass and will be eligible immediately next year.