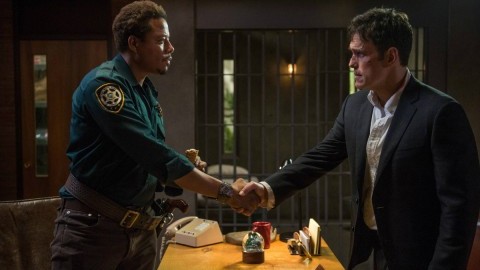 It’s an opportune time for “Wayward Pines.” An adaptation of the trilogy of novels by the same name by Blake Crouch, the show, billed as a 10-part mystery event by Fox, was commissioned right before the announcement of the returns of the classic shows “Twin Peaks” and Fox’s own “X-Files.”

Set in the fictional town of Wayward Pines, Idaho, the miniseries follows Ethan Burke (Matt Dillon of “Crash”), an agent of the Secret Service, as he investigates the mysterious disappearance of two of his fellow agents, including Kate Hewson (Carla Gugino), whose ties to the married Burke were more than professional. After a car accident, Burke wakes up in the small town of Wayward Pines, where nothing seems to add up and from which nobody leaves.

Dillon is likeable as the stolid and stoic Burke, perhaps in part because his character – and the rest of the characters – makes fewer of the infuriatingly oblivious decisions that seem to be endemic to protagonists in the genre of “event television.” The slow burn of the plot is balanced by the web of secrets and relationships among the characters, including Terrence Howard (“Empire,” “Crash”) as the appropriately opaque and perhaps menacing Sheriff Arnold Pope, and is overshadowed by the cryptic Nurse Pam in the scope of the widening mystery, played by Melissa Leo (“The Fighter”).

The cast isn’t unique to the intricate constellation of characters that brought “Twin Peaks” to life, and the show is helped by the combined beauty of its setting, substituting British Columbia for Idaho, and its sharp visual sense, from the editing to the omnipresent trappings of small-town Americana.

As a matter of fact, Crouch has cited “Twin Peaks” as one of his primary influences in writing the novels, which would put “Pines” somewhere in the second wave of shows directly indebted to the short-lived series from David Lynch. These include the concluded “Fringe,” also on Fox, and Disney’s animated series “Gravity Falls.”

What jeopardizes “Wayward Pines” in wearing its influence on its sleeves is the slow path it takes to developing an eventually tight and compelling cast through which its questions about judgment, morality and obligation play out. Worse still is a lack of any levity or lightness in the vein of “Twin Peaks” to counter the serious tone of much of the show.

The latter problem shows acutely with Shannyn Sossamon (“A Knight’s Tale”) and Charlie Tahan (“Charlie St. Cloud”) as Burke’s wife Theresa and son Ben, respectively. The show neglects their development for much of the early plot and leaves Theresa to appear unfortunately shrill and Ben unremittingly surly, until their involvement finally deepens when they are placed in the real substance of the story.

Like Lynch with “Twin Peaks,” a film director is involved whose movies are premised on disorientation and stark departures from the ordinary: M. Night Shyamalan. But in this case, his involvement bears more resemblance to that of J.J. Abrams with “Fringe” as a high-profile executive producer leaving the show in the hands of a core creative team.

The 10-episode adaptation of the novels is largely the brainchild of Chad Hodge, a show runner and producer best known for the series “Runaway” on the CW and “The Playboy Club” on NBC. Whereas Shyamalan directed the first episode of the miniseries and is credited for executive-producing three episodes specifically, Hodge’s creative fingerprints are on its entirety, being credited as a series writer and for writing several specific episodes.

The mystery at the heart of “Wayward Pines” that Hodge and Shyamalan want us to invest in is bolstered by turns from Toby Jones (“Infamous”) as the warm yet unforthcoming Doctor Jenkins, and from Juliette Lewis (“Cape Fear”) as Beverly, a woman in Wayward Pines with secrets of her own.

With the subject of mysteries and suspense, Shyamalan’s history in film of using twist endings begins to loom and threatens a deeper analysis of the show’s strengths and weaknesses. That is not the case here. Helped by the aforementioned development of inter-character dynamics, the series is also given a better equilibrium by an editorial decision made by both Shyamalan and Hodge – rather than leave the reveal until the end, as in the first novel of the trilogy, it is placed in the center of the miniseries, giving strong grounding to the questions of morality, duty and hope that guide its conflicts.

Though rough around the edges, and eager to carry a lot on its plate, “Pines” is a sharply shot drama with a plot that threads well between mystery and engagement.

“Fringe,” a predecessor on Fox, had an uneven beginning itself and frequently drew the ire of viewers for winding and twisty plots in the seasons afterward, but was ultimately carried on the back of the intense emotional power of its actors’ relationships.

A little better balanced, but a little self-serious in parts for some tastes, “Wayward Pines” ultimately does not miss the forest for the trees.