Garnett: New emoji may have missed the mark on equality 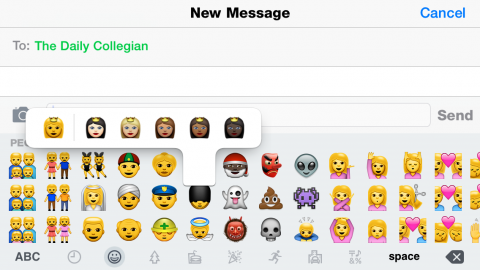 The newest update from Apple includes 300 new emoji, approximately 51 of those devoted to race. Popular symbols and characters like the princess and the “thumbs up” signs now support a spectrum of races. Five new skin tones are now available that are modeled after types one through six on the Fitzpatrick scale, a standard used in dermatology.

By holding down an emoji, the five other options will appear, just like when searching for a letter with an accent mark in the alphabet. The default tone of the new emoji is yellowy-orange color, done to discourage any default race. This yellowy-orange pigment, however, has been seen by many as representing the Asian race. Although this was seemingly not Apple’s intent, the fact that it could be perceived as a racial mockery suggests flaws in the product.

Ironically, emoji were created in Japan in the 1990s and were then introduced to AOL instant messaging platforms. Unlike today, in the first use of emoji in the 90s, race was not present and the emoji faces were only displayed in the yellowy-orange pigment.

Caitlin Dewey, a writer for the Washington Post comments in an article about emoji, “In either case, if the yellow face is racially neutral, where is the Asian character among Apple’s new offerings?” Surely, if there was a defined Asian race option, then there wouldn’t be the possibility for misconstruing the yellowy-orange tone as a racist remark of that group of people.

According to the Emojipedia Blog, previous guidelines for emoji people included making them, “as neutral as possible regarding race, ethnicity and gender.” It is safe to say that those standards have since been revoked with the inclusion of new emoji. The new emoji that include the race variant option were chosen based on classification of a specific gender or accessory. Now gender-neutral emoji, as defined by Apple, are represented with the yellowy-orange color.

Another part of the iOS 8.3 update included around 14 new emoji families. While same-sex parents are now represented, they are only available in the yellowy-orange color. According to emoji guidelines, this classifies same-sex couples as non-human, since deeming them gender-neutral would defeat their purpose to begin with. However, the fact that same-sex parents are only just receiving emoji is another problem in itself.

Apple’s attempt at political correctness has gone completely wrong in the racial realm. Dewey further states, “Now Apple is asking us to see emoji not as icons, only, but as actual representative stand-ins for real human people.”

Another writer for the Washington Post, Paige Tutt shares similar feelings as Dewey, saying, in reference to the new emoji, that this “has taken a turn for the worst.” She acknowledges that Apple had good intentions but that is not to excuse the backlash that some people of color are now dealing with as a result of this carelessly executed emoji reform.

Tutt reflects on recent acts of racism on social media made possible with the different skin tone options available. Tutt explains that, “These new figures aren’t emoji of color; they’re just white emoji wearing masks.” It would be racist in itself for Apple to create stand-alone emoji, depicting only certain races and cultures with stereotypical features, but Tutt explains that the company is already guilty of doing this.  By changing the skin tone of a culturally specified emoji, this only exacerbates the offense.

The WeMojis app is an alternative to the Apple iOS 8.3 update, featuring what Tutt was alluding to, but in a very different context. According to a Forbes article, WeMojis, “reflects a deeper connections to the diverse lifestyles that define multicultural millennials.” Donovan Brown, comments on his family-spun creation alongside his mother and brother, saying, “There’s not a Snapchat, or app with similar success, where you can point to the CEO and see a person of color.”

The Forbes article describes emoji as, “Clever, convenient and culturally adopted – emoji’s have made it easier for the mobile generation to confidently speak their mind without uttering a word.” This is true in the sense that emoji reflects the socially unjust society that we still inhabit.

Alternatives to emoji, like WeMojis, have gained popularity and success and the new emoji addition has received praise from people and media sources such as USA Today. But perhaps emoji should have been devoid of race and remained the yellow-orange default from the 90s. It seems Apple could have amended the problem not by doing more but by doing less.

As Tutt said, “What Apple has done is introduce race into daily conversations where it doesn’t necessarily need to be.”