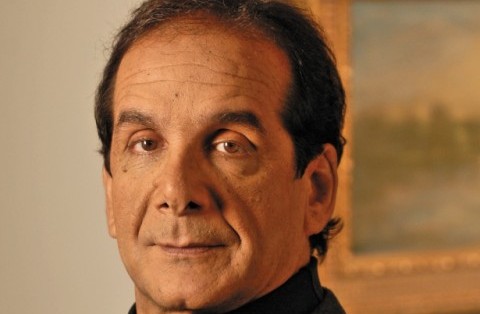 Charles Krauthammer, a conservative columnist and author, challenged the effectiveness of President Barack Obama’s foreign and domestic policy during a lecture titled “Consequences of American Retreat” at the Fine Arts Center Wednesday night.

Organized by the University of Massachusetts Republicans Club, Krauthammer’s speech focused on how the United States appeared weak and incapable, especially in the Middle East due to these policies. He also examined the impact of Obama’s domestic policies, particularly the Affordable Care Act.

“Nature abhors a vacuum, and so does geopolitics,” Krauthammer said. “In this case, adversaries and irredeemables have stepped into the vacuum.”

Much of Krauthammer’s view of the president’s domestic policies was influenced by his view that Obama’s political views are socially democratic and comparable to those of ideological political parties in Europe. Krauthammer contrasted this with American politics, which he described as being much more centrist.

He described Obama’s domestic policies, especially the Affordable Care Act, as ambitious and sweeping reforms that would define his legacy.

However, Krauthammer viewed these policies as becoming increasingly unpopular in a country that he described as being center-right politically. Krauthammer emphasized how Obama’s health care reform was implemented to enforce the will of the federal government, and that it was rejected by the United States in the 2010 and 2014 midterm elections.

“Obama has left the Democratic Party in ruins as a result of these elections,” Krauthammer said.

He explained Obama’s success in his 2012 re-election was a result of his character and personality, rather than his ideology. Krauthammer said Obama seemed like a much more relatable candidate to voters than Romney, and that Romney had a “personality deficit” which severely hurt him in the election.

Krauthammer also felt that Romney’s inability to criticize Obama’s health care reform due to his implementation of similar reforms while governor of Massachusetts severely hurt his chances of election.

“If the presidential candidate can make the case, he wins,” Krauthammer said. “Romney had trouble making the case.”

Krauthammer said he viewed the current Republican candidates for President as being more capable of making such a case. Krauthammer added that foreign policy would play an unusually large role in the 2016 election as a result of the Obama administration’s policies.

Krauthammer described Obama’s foreign policy as evasive, stating that the inability of the United States to support its allies in the Middle East, Eastern Europe and the Pacific Rim had resulted in American power being challenged globally.

“Our allies don’t trust us, and our adversaries don’t fear us,” he said.

Krauthammer was very critical of the current administration’s inability to provide defensive weapons to Ukraine, and called the sanctions levied against Russia “pinprick.”

Krauthammer also viewed the success of the Islamic State as a result of American withdrawal from Iraq and described the beheading of American journalist James Foley as a defining moment in Obama’s foreign policy.

However, he was most critical of the Obama administration’s relations with Iran, citing the recent nuclear deal as a major error. Krauthammer said the deal gave Iran “a paved highway to nuclear weapons,” and would encourage countries such as Egypt and Iran to acquire such technology.

“Think of the world for your children where the most unstable region in the world is bristling with nuclear weapons,” he said.

Krauthammer implied that American disagreement with Obama’s domestic policies and anger with his foreign policy would result in a Republican victory in the 2016 presidential election.

“We’ve just had six years of everything else, and I’m convinced we’re going to do the right thing,” he said.

Krauthammer also discussed the recent Baltimore riots, calling the video of Freddie Gray’s arrest “horrifying,” and described Gray’s inability to move his legs while being dragged by police as a signal that he had been paralyzed.

“It is a kind of torture, and it is a travesty,” he said.

Krauthammer criticized Baltimore’s investigation into Gray’s death, which he said lacked transparency, and the inability of Baltimore authorities to protect the city from riots.