Leaving the Collegian in a better place than I found it 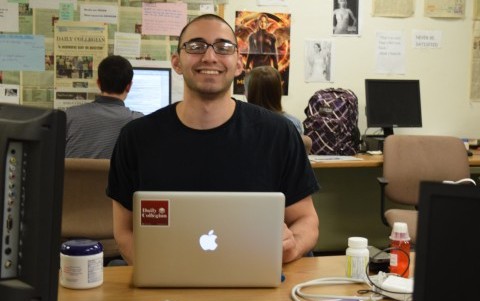 The preface for my final words at The Massachusetts Daily Collegian begins in Madison, Wisconsin.

It was a Saturday night in late August, just days before the start of my junior year at the University of Massachusetts. Hours earlier I was covering the first of the UMass football team’s many blowout losses that season.

After the game, I joined Collegian alumni Daniel Malone and Bob McGovern, who covered the team for other publications, on an outing through downtown Madison. We ate dinner. Bob had a few drinks. But we had flights to catch the next morning, so we left early in the night for our respective hotels. Dan and I rented cars for the weekend and Bob asked me to drive him back to his hotel.

Full disclosure: I’m still not sure whether Bob was feeling sentimental as we chatted during the drive, or if it was the alcohol talking. Either way, it was an important conversation that replayed in my mind seven months later when I ran for editor-in-chief.

What stood out most were words that are passed down to each generation of Collegianites: “Leave the Collegian in a better place than you found it.”

It’s simple – and a little cliché – but it’s significant. All year a typed copy of those words have hung on the wall behind my desk in the business room. It’s a reminder of the tradition of the Collegian and it’s meaning to those who have adopted the windowless abode in the Campus Center basement as a second home.

Those words were the inspiration behind my EIC campaign. It’s been my goal to continue that legacy and fulfill the words passed down to me. Whether I’ve achieved that goal is not my call (just don’t ask the Student Government Association). The point in this is to explain why the Collegian matters – to me, to those before me and those who will come after me.

I was about 10 years old when I first realized I wanted to be a journalist. I was old enough to realize I didn’t have the talent or athleticism to be a professional athlete, so covering sports in some capacity was the next best thing.

I entered college in fall 2011 with an idea of what I wanted to do with my life. At first I wanted to be on television – something about wanting to be famous – but two short weeks at the Collegian sparked an addiction. There was a thrill in seeing my name in print. It was rewarding. It ignited a passion for journalism and a desire to have a career in this industry.

The Collegian changed – and ultimately shaped – my college experience. I’m a loner by nature. I struggle to make, and maintain, consistent friendships. I’m guarded. I loathe talking about myself.

Somehow, the Collegian brought me friendships I’ll never lose, forced me into the lives of the funniest, smartest and most caring people I’d never known – people who exceed my definition of friendship.

Let me tell you a quick story. It was the end of my sophomore year. I was an assistant sports editor at the time, working desk on my 20th birthday. I didn’t mind. It’s not like I had plans on a Wednesday.

But midway through the night Katie Landeck, the EIC at the time, and Steve Hewitt, then the sports editor, EIC-elect and one of my good friends to this day, entered the newsroom with a pair of small birthday cakes – one chocolate and the other vanilla – with candles lit for me.

I felt part of a special group.

My parents went through an ugly separation the summer before my sophomore year that ended in divorce. It was a grim experience that still affects me. The Collegian was my outlet. I felt the satisfaction of spending late nights tucked away in that dingy, yet cozy, office, trying to master Adobe InDesign, write flawless ledes and memorize all the state abbreviations in AP Style.

It was the perfect distraction.

My dog died my junior year. I sped to the war room, which at the time had no working lights, stationed in the nearest corner of the newsroom. I cried.

I needed a quiet place to do my homework. The Collegian was my destination. I wanted people to watch a game with. I stood inches from the TV in the Collegian business room as Koji Uehara struck out Matt Carpenter in Game 6 of the 2013 World Series, and as Malcolm Butler intercepted Russell Wilson at the goal line in Super Bowl XLIX.

On April 9, 2014, UMass basketball guard Derrick Gordon became the first openly gay Division I men’s college basketball player. Patrick Hoff, then the news editor, current managing editor and one of my good friends, and I spent about 15 hours in the newsroom that day, engineering the best possible coverage of an historic event. That was my favorite day at the Collegian.

Given my current job status and the difficulty of thriving in this business, I’d be lying if I said I’ve reaped professional rewards yet. But without the Collegian, I wouldn’t have had three summer internships, covered college and professional sporting events, and built alumni connections with those who came before me. That at least translates to potential.

I ran for editor-in-chief last spring because I wanted to give back, to lead the Collegian in a direction in which it could thrive for the coming decades.

Working at the Collegian, especially as editor-in-chief, was like getting a tattoo. The process was painful at many points, but the significance of this news organization will always be imprinted in me, making it all worth it.

There were nights when I yelled at people, got into heated arguments. I made plenty of mistakes. Went home some nights with regrets. But over four years, the Collegian provided with skills, characteristics and friendships that I could never equally repay it for.

There’s another small piece of paper that I hung on a wall in the newsroom. It says, “Never be satisfied.” I embody that three-word phrase. It’s why the little things irk me. It’s why nothing I write is good enough, why none of my page layouts are creative enough.

But the Collegian has left with me a satisfaction that is often unattainable. There’s nothing more I can do.

The result, I hope, is a Collegian in a much better place than I found it.

Nick Canelas was the Collegian’s editor-in-chief. He can be reached at [email protected]