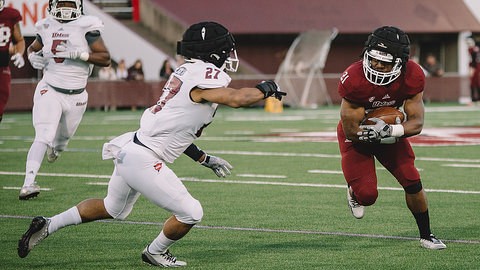 It was exactly what Mark Whipple hoped for.

The way Whipple saw it, it was competitive throughout. There was energy on both sides of the field from both sidelines. He saw young players excel in expanded roles and, perhaps most importantly, there were no major injuries.

“I thought it was a really good night,” Whipple said following the game. “We had a really great spring.”

For a game which plodded along for most of the night, the final 10 minutes increased in intensity.

Austin Whipple, who quarterbacked Team UMass, found receiver Dan Jonah for a 19-yard touchdown pass just five plays into the fourth quarter to give his team a 10-3 lead.

But Ross Comis, one quarterback of Team Minutemen, responded, embarking on a 10-play drive which resulted in him scrambling for a 2-yard touchdown with four minutes, 48 seconds left to draw even.

From there, both teams had an opportunity to win the game in the final minute. Team Minutemen put kicker Blake Lucas in position for a 32-yard field goal attempt with 52 seconds left, only to see the attempted snap bounce of holder Andrew Verboys’ face for a fumble.

Whipple took over and maneuvered Team UMass into position for the game-winning field goal in 48 seconds.

“It was important to them,” Whipple said. “I thought it was what you hoped for, you hoped it comes down to the fourth quarter.”

Whipple said the end-of-game situation wasn’t unlike one they’ve worked on in practice.

“You try to with practice,” said Whipple when asked about the pressure situation. “We’ve done that in practice. That’s what you hope for. If he had missed it, we would’ve gone to overtime and let them play it out.”

For Whipple, Friday’s game at McGuirk Stadium offered a chance to evaluate. He watched from the sideline while assistants coached both teams.

With most of its high-profile players sitting out and acting as assistant coaches – Blake Frohnapfel, Jamal Wilson, Tajae Sharpe, Rodney Mills, Jovan Santos-Knox, Randall Jette and Trey Dudley-Giles didn’t play due to coaches decision – UMass took an extended look at a number of reserve players, notably at the quarterback position.

Austin Whipple and Verboys lead Team UMass, while Comis and Randall West ran Team Minutemen. Whipple finished with the strongest stat line, going 11-for-19 for 100 yards, a touchdown and an interception, while Comis finished 8-of-20 for 130 yards.

Verboys was 3-of-6 for 52 yards and West was 3-of-4 for 26 yards. With Frohnapfel out, and senior quarterback A.J. Doyle taking reps at tight end, it was an opportunity to offer clarity to the backup quarterback situation.

“They all got better as it went on, they all played pretty good,” Whipple said, while pointing out it took them time to get over initial nerves.

It was also an opportunity for individual players to make an impression before the team starts phase three of preparation for next season, which is summer workouts. Specifically, nose tackle Robert Kitching (two sacks) and linebackers Shane Huber and Steve Casali (16 combined tackles) played well.

Of course, there are areas that still need improvement. The two sides only combined for 122 rushing yards and both offensive lines allowed an ample amount of pressure throughout the game.

But for Whipple, the good outweighted the bad. It was, as Whipple said, the type of depth-building he hoped to see.

“I think the young guys, a lot of them grew up (tonight),” he said.