Memories at McCoy Stadium: Magic of McCoy won’t be the same after relocation 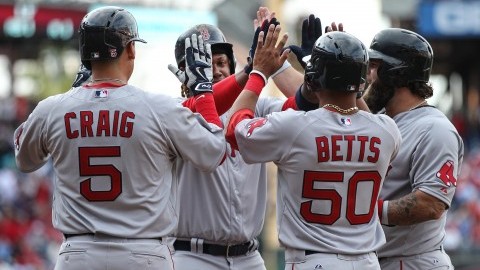 For Boston Red Sox fans, the season began with a promising start, as the Red Sox combined for five home runs and held the Philadelphia Phillies to three hits in an 8-0 victory. An exciting season filled with home runs, stolen bases and web gems is upon us, and I’m sure that the average Boston fan hopes to take at least one trip to the historic Fenway Park this year, joining the thousands of fans cheering and booing under the shadow of the Green Monster.

While a trip to Fenway is undoubtedly on the summer agenda, I’ll also be buying tickets to a place where I first discovered the beauty of America’s Pastime: McCoy Stadium.

On Feb. 23, plans were announced to move the Pawtucket Red Sox, the Triple-A affiliate of the Boston Red Sox located in Rhode Island, to Providence within the next few years, a decision which broke the hearts of thousands of local fans in the city of Pawtucket.

I grew up in a family that loves baseball. Although Red Sox games at Fenway were by far the most thrilling, tickets were expensive and hard to find. To get our baseball fix, we resorted to somewhat nontraditional measures – incorporating Red Sox away games into our vacation plans, and attending a wide variety of international and independent league games, including the North Shore Spirit and the Brockton Rox.

The main fix for our baseball addiction, however, was in a stadium 20 minutes south, where the tickets were cheap and the parking was easy. Sitting in the stands of McCoy Stadium, in blazing heat and pouring rain, was a staple of summer days, and it hurts to know that in a few years’ time, all of its history will be erased.

When I was a young kid still relatively new to the game of baseball, I remember staring at the scoreboard painted on one of McCoy’s walls, an illustration of the famous 33-inning game played between the Pawtucket Red Sox and Rochester Red Wings in 1981, the longest game in professional baseball history. It was amazing – a baseball game lasting not nine innings, not 10 innings, but 33. McCoy was a special place.

We went to as many bobblehead nights as we could, collecting the likes of Derek Lowe, Trot Nixon and Dustin Pedroia, former PawSox who eventually became prominent members of the Boston Red Sox.

I used to a cut a hole in a two liter soda bottle and hang it over the dugout, and I’ll never forget the excitement of feeling the string tighten as a player below took the ball from the bottle and signed it in permanent marker.

Sometimes we would get tickets to the barbecue on the first base line, prime foul ball territory, and I’d eagerly chase down rogue balls as they bounced on the concrete. Getting a fried dough the size of my head, or an ice cream in a mini Red Sox helmet was a must. In another memorable moment, I am standing on my seat, waving my arms like a maniac and waiting for Paws, the polar bear mascot, to throw out a plush baseball in my direction — the balls always soaring just out of reach.

For many Red Sox fans, PawSox games provided an opportunity to watch some of the big league players who were rehabilitating injuries in Triple-A. Years ago, Manny Ramirez played a game in Pawtucket and my dad and I sat on the third base line. Manny trotted in from left field and casually tossed the ball into the crowd, prompting my dad to leap back into his seat and snag the ball that sailed over his head. He handed me the “Manny Ball” and that moment is not only my fondest of McCoy, but one of the fondest of my life.

I’m sure a lot of people will say that the magic of baseball will continue in the PawSox’s new park, but it won’t be the same. McCoy Stadium wasn’t just a place to watch a team play ball, it was a place where dreams unfolded – a place where young kids fell in love with the game. While the city of Pawtucket has had a troubled history, fans still flock to the stadium, with smiles on their faces and gloves on their hands. McCoy was Pawtucket’s pride. McCoy was a sanctuary.

Teams are bought and sold and relocated and that’s how the world of professional sports works, but it hurts to see the PawSox go. Watching them play was more than just being a spectator.  It was a part of growing up. For me, and thousands of others, McCoy is more than a ballpark – it’s a symbol of community, a symbol of family and a symbol of happiness.

While Fenway Park is a special and amazing place in its own right, McCoy Stadium has always been that hidden gem: the quaint little ballpark tucked into congested Pawtucket where you could eat some Cracker Jack and sing “Sweet Caroline” and listen to the beautiful crack of the bat, all for $ 15 and a 20-minute drive.