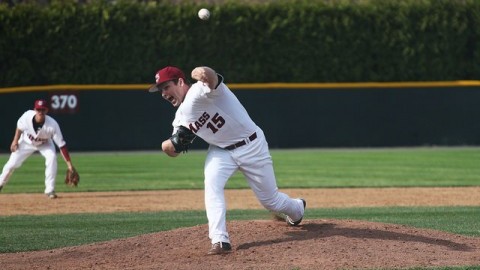 The Massachusetts baseball team’s struggles continued Wednesday afternoon, as their losing streak hit 11 after a shutout loss against Quinnipiac, who won by a final score of 3-0.

Tim Cassidy, who dropped to 1-3 on the season, gave up three runs on six hits through eight innings of work while striking out six and only walking one.

Minutemen coach Mike Stone was very pleased with his pitcher’s performance despite the loss.

“I thought he pitched great today,” Stone said. “That one inning was tough, especially with the leadoff walk, but he put us in a position to win and we couldn’t do anything about it offensively.”

Cassidy’s performance also gave Stone the opportunity he did not have in a while – to give his bullpen a well-deserved rest.

“Yesterday we were also hoping to not go to our bullpen as early as we did but things didn’t go as planned,” Stone said. “But Tim was able to give us eight strong innings and our bullpen was able to get some rest.”

A solid pitching performance was once again wasted by UMass as its offense wasn’t able to get anything going against Quinnipiac pitching.

After struggling in the first, Bobcats starter Charlie Murray found his groove and held the Minutemen in check with six scoreless innings, allowing only three hits, along with four strikeouts and one walk.

Then in the seventh, Robert Hitt came in for the Bobcats and pitched three perfect innings to close the game.

Paul Yanakopulos had the most success at the plate out of all the Minutemen as he had two of the team’s three hits. Yanakopulos was 2-4 for the day, one of his hits being a double.

Brett Evangelista accounted for the team’s third and final hit with a single in the bottom of the fifth. The final 14 UMass batters were retired in order.

Stone wasn’t overly impressed with Quinnipiac’s pitching and thought the lack of hits had more to do with his team than anything else, and his third baseman felt the same.

“I didn’t see anything from them that made them unhittable,” Stone said. “We managed to make him (Murray) throw 34 pitches in the first and I thought we were going to be able to hit off this guy. Unfortunately we did not.”

They did a good job locating their pitches and getting us out but I thought we could have done more,” Yanakopulos said. “We’ve been struggling the last couple of games and we need to improve.”

During their current losing streak, the Minutemen’s offense has struggled mightily. The game against Quinnipiac is the fourth time in the last 12 that they have been shut out and they have not totaled more than seven runs in a game.

With the season dwindling down, Stone and senior Yanakopulos would like to see a lot more from their team in the final 10 games.

“I would like to see resiliency from this team,” Stone said. “The defense has been solid where it has to be. I want to see good pitching from our guys and I want to see improvements on the offensive side.”

“I want to finish the season strong and aim for the Atlantic 10 conference tournament,” Yanakopulos said. “We have a big inter-conference series coming up this weekend against Rhode Island. We are in control of our own destiny so hopefully we can get it done.”

UMass will have a break from game action Thursday and then look to end their longest losing streak of the season when they start a series against Richmond on Friday.