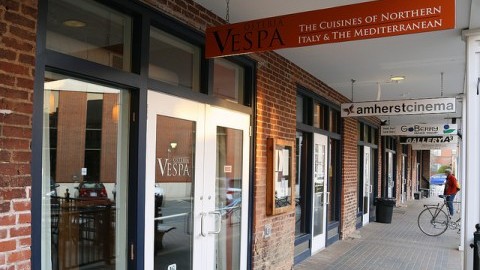 A taste of authentic northern Italian and Mediterranean cuisine has found its way into Amherst Center.

The restaurant occupies the space formerly occupied by Arise Farm to Table Pub & Pizzeria, next to Amherst Cinema. Owner Jonathan Welch purchased the space in November 2014, before renovating it and opening for business on March 16.

“Osteria is a restaurant that you’d find in a side street somewhere (in Italy), where the food is very fresh and very simple,” Welch said of the restaurant’s name. “It’s a fun and relaxed atmosphere, which is what we’re trying to do here.”

Welch prides himself on the restaurant’s casual dining and fresh, local ingredients prepared by the chef, Tom Schnapp. Welch currently lives in Amherst, and Schnapp has been in the Pioneer Valley for over 10 years.

The two met while working at the Farm Table Restaurant in Bernardston, and eventually decided to open their own eatery in Amherst.

“We’ve had an excellent response. People are loving the food and they love the ambiance,” Welch said. “I kind of figured with Tom’s talent and experience that it would reflect in his food, and people are responding to it very nicely.”

According to Schnapp, the restaurant locally sources as much food as possible. He said all meats hail from New England through Northeast Family Farms, with local vendors providing produce products.

Schnapp said the Osteria Vespa menu is designed to be relatively small but constantly changing, typically serving about four items for two to three weeks at a time.

Schnapp added that the kitchen staff expects some guests will resist the menu changes, though the goal is to replace customer favorites with new offerings they will find equally, if not more, enjoyable.

“The focus for us is to just serve really great and simply prepared food with good ingredients that are local and organic whenever possible,” he said.

The restaurant’s pasta is fresh as well, with some coming from outside vendors and some made in-house. Though his original goal was to produce all pasta on-site, Schnapp said the size of the kitchen does not currently allow them to do so.

He hopes to eventually make more pasta by hand in the M&M Green Valley Produce kitchen in Deerfield, which Welch also owns.

Welch is now working toward finalizing permits for the restaurant’s outdoor eating area and hopes for it to be open by May.

Osteria Vespa is open Monday through Saturday for lunch and dinner at 28 Amity Street. Welch also said the restaurant is considering opening on Sundays as well, depending on customer demand.