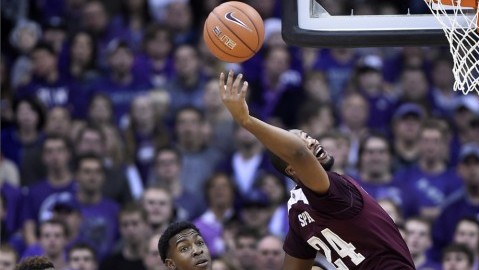 On Sunday, they added a much-needed body to its front court, as former Texas A&M forward Antwan Space will transfer to UMass according to multiple reports. Space, a senior, will be not be forced to sit out a season per the NCAA’s rule on fifth-year transfers and is eligible immediately.

Space played his first collegiate season at Florida State before transferring and playing two seasons with the Aggies in which he averaged 5.5 points and 4.0 rebounds per game. Space saw his role significantly decline this past season, averaging only 12.4 minutes per game compared to over 23 in the 2013-14 season.

The 6-foot-8, 230-pound forward was a four-star recruit coming out of DeSoto High School according to Yahoo! Sports and received offers from perennial power programs such as Gonzaga and Maryland.

It’s unclear how Space will fit into UMass coach Derek Kellogg’s rotation – he’s not allowed to comment on recruits until they sign. The Minutemen return seldom-used senior center Tyler Bergantino and forwards Zach Coleman and Seth Berger, who both underwent surgery following the season and will rehab throughout the summer.

They’ll also have both Rashaan Holloway and Malik Hinds. Both forwards/centers were academically ineligible to play last year and still have all four years of elgibility.

The Minutemen hope this isn’t their only transfer addition, as Marcquise Reed (Robert Morris) is scheduled to visit UMass on April 24. Reed averaged 15.1 ppg last season for the Colonials and could add to the 3-point game, as he shot 41 percent from behind the arc last season.