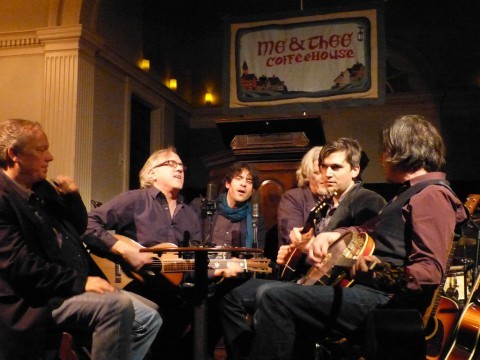 Session Americana has visited Northampton more than a few times. The band, active since 2005, has toured the continental United States and Europe, but when it comes to the Pioneer Valley, Session Americana has played only a handful of times at locations other than the Parlor Room.

A small, intimate performance space that operates on the “bring your own beer” rule, the Parlor Room will host the band on Saturday.

The group, comprised of a number of longtime Boston-area musicians, first coalesced in 2004 as an informal act at the Cambridge pub, Toad, where its drummer, Billy Beard, was a booking agent, and remains so today. After lineup changes and a growth in popularity during an intermittent two-year residency at Toad, Session Americana would eventually move to the Lizard Lounge, also in Cambridge, which has served as a de facto base of operations for the band ever since.

Meant to promote the release of its sixth album, “Pack Up The Circus,” after a successful fundraising campaign via Kickstarter, Session Americana’s stop in Northampton is its last American tour date before a two-week string of performances in Europe.

Described as almost a “super-group” of Boston-area musicians, Session Americana’s core lineup has remained roughly the same. With Beard remaining on drums and vocals, the band’s core includes solo musician Dinty Child, singer-songwriter Ry Cavanaugh, bassist Jon Bistline and Jim Fitting – of Treat Her Right and The The – on harmonica, but members swap roles and instruments as necessary.

The band has a so-called “sixth seat” that has been occupied by a number of collaborators, including former bassist and vocalist Kimon Kirk, the singer-songwriter —and also Cavanaugh’s wife — Jennifer Kimball, fiddler and singer-songwriter Laura Cortese and guitarist Duke Levine.

The heavily collaborative craftsmanship of Session Americana has served as a through-line for growth since its founding. Reflecting its original focus on music for families in the area, a number of the songs on its first album, “Table Top People Volume 1 + 2,” are light-hearted fare that wouldn’t be out of place in the programming for a family radio station.

A sense of pure fun is present in some of the group’s more recent compositions, like the new album’s Cavanaugh-led lament of heartbreak, “Notary Public,” and Fitting’s raucous tribute to tequila, “Vitamin T.” But the band is also capable of pensiveness and even melancholy on tracks like “Pack Up the Circus” and “Gold Mine,” both from their 2012 album “Love and Dirt.”

The band’s musical approach has centered on roots-rock and folk, but the wide breadth of the members’ interests and influences is reflected in the sheer variety of artists in the covers that have become a staple of their shows. They regularly cover everything from The Flaming Lips and Tom Waits to Lorde and Prince.

A cover of “Doreen,” a laid-back but infectiously enthusiastic story-about-a-woman song by their fellow Bostonian, the late Mark Sandman — of the band Morphine — is right at home with their own “Beertown,” an affectionate, rowdy tribute to beer and the people who serve it.

No matter which artists Session Americana covers or cares to channel in their music, there is a palpable energy that comes from the dynamic of veteran musicians who have worked together long enough to be comfortable with one another and confidently hone their craft to a shine. Their enthusiastic, engrossing strain of modern roots-Americana will be at the Parlor Room this Saturday at 7 p.m. Tickets are available online for $15, and at the office of the Parlor Room on weekdays from 10 a.m. to 5 p.m.

Griffin Lyons can be reached at [email protected][liveblog]