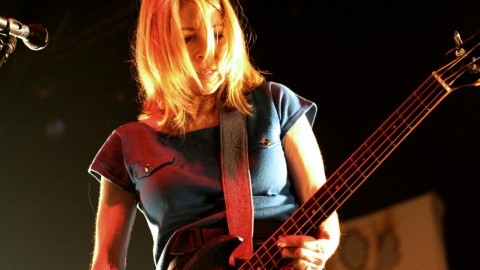 Now that Sonic Youth has broken up for good, it’s time for the inevitable flood of reissues and discussions of the band’s legacy. But, few bands deserve this lavish treatment more than Sonic Youth. Though the group became more commercially successful than ever before at the very end of its career, it still doesn’t get enough credit for being a band that truly changed everything.

Not since the Velvet Underground had a band so seamlessly merged the worlds of avant-garde art with populist rock. The band took it on the chin for virtually every independent group that followed, carving, with other pioneers like Black Flag, a map of progressive venues through America that did not exist before. People seem to take for granted now.

“Bad Moon Rising,” which was released in 1985 and reissued on April 13 by the band’s own label, is an interesting turning point for Sonic Youth, and a natural starting point for the band’s reissue campaign. It stands somewhat awkwardly on a bridge between the band’s roots in the ultra-experimental No Wave scene in New York and the classic rock influences that it was not entirely comfortable with yet.

Looking back on “Bad Moon Rising” with fresh eyes, it is easy to see how Kim Gordon is the album’s anchor. Other than the album’s lead single, “Death Valley ‘69,” which was a collaboration between Thurston Moore and No Wave pioneer and poet Lydia Lunch, Gordon’s few vocal contributions are the album’s best.

Her voice is the first you hear, after the beautiful, twisty guitars on “Intro” and the restless instrumental churning of the first half of “Brave Men Run (In My Family).” As Moore and Lee Ranaldo surround her dub-like bass playing with harmonic chiming, Gordon whispers, “Seven days and seven nights/I dreamt a sailor’s dream at sea” to the listener as if it were a dark secret. But when she repeats the line, she changes “dream at sea” to “dream of me,” introducing the dark sexuality that runs through the album.

The theme of unsettling dreams returns on Gordon’s next appearance, the still-terrifying “Ghost Bitch.” Over Gordon’s deeply distressed intonations, Bob Bert, the band’s drummer at the time, pounds out a relentless, primal rhythm. Like all of “Bad Moon Rising,” “Ghost Bitch” plays on fear and disorientation, amplifying the darker side of the idealism of America in the mid-80s.

On the non-album single, “Flower,” Gordon demands, “support the power of women!/Use the word… F***!” And while this may sound like child’s play now, in 1985 it was an unprecedented and powerful call to arms, so much so that even Rough Trade Records famously refused to release the single initially.

Other than “Death Valley,” Moore’s contributions still sound unfocused, especially in light of the many classics he would write for the band on its next three albums. The church bell guitars on “I’m Insane” are still entrancing, but it is clear that Moore’s Beat poetry-influenced lyrics are still developing.

His greatness on the album comes less from his lyrics or guitar playing than the album’s overall sound. The warped Stooges sample that plays at the beginning of “I Love Her All The Time” brilliantly stamps into the listener’s head the album’s sound: harsh, primitive, but boiling with tense energy that it has gathered from the world around it, just like the Stooges.

But even with its other curiosities, “Bad Moon Rising’s” calling card is still “Death Valley ‘69,” arguably Sonic Youth’s first classic song. Gordon’s harrowing bass line and the song’s enormous riff mark it as Moore’s first serious flirtation with the classic rock influences of his youth in a Sonic Youth song. The collision of big-rock bombast, the horrifying story of the Manson murders and Lydia Lunch’s deeply unsettling squealing still doesn’t sound like anything else in the world.

Thirty years later, it marks the point where Sonic Youth went from an unclassifiable, motley crew of outcasts who showed up too late for the No Wave scene, to one of the world’s most daring and progressive rock bands. “Bad Moon Rising” as a whole, and the bonus tracks that come with this reissue, is an occasionally difficult, but crucial document that marks the transition between these two phases of one of rock’s greatest bands.